X
This site uses cookies to provide and improve your shopping experience. If you want to benefit from this improved service, please opt-in. Cookies Page.
Accept Cookies
NO QUIBBLE RETURNS buy with confidence
FREE DELIVERY on most orders to UK
SELL OR TRADE make money from your old gear 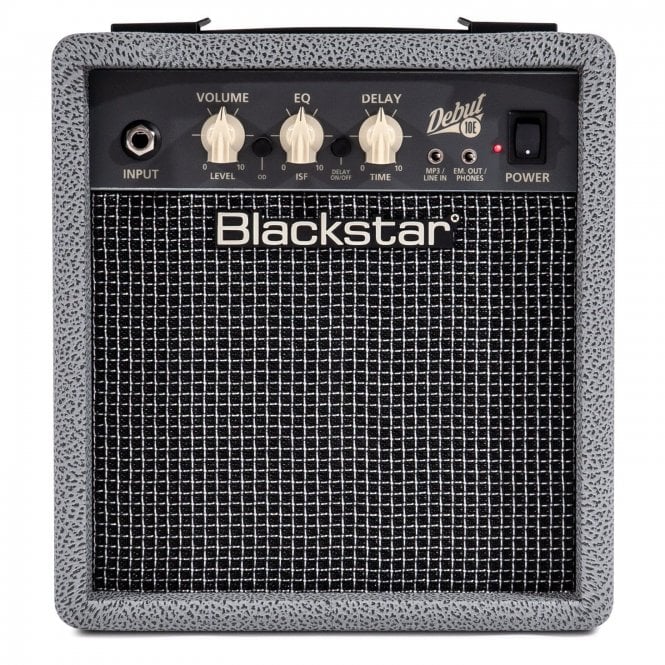 The Debut 10E is the most amazing sounding practice amp with patented ISF and built-in ‘tape’ delay effect.

Item in Stock Item out of Stock   |   IN STOCK Next Working Day Shipping Available
Order within for delivery on Monday 22nd August
Loading...
Check Stock in Stores
Stock In Stores
Next Working Day Delivery order before 2pm, Mon-Fri
No Quibble Returns Return within 14 days for a full refund

Rather than a conventional guitar speaker, Debut amps are equipped with a pair of stereo linear speakers akin to those you would find on a HiFi system. This means the Debut doubles up as a great sounding speaker for:

Plug in your phone, tablet or device and jam along to your favourite tracks with incredible audio quality from Debut’s stereo linear speakers.

When you need to cut the volume, hook yourself up to the Debut’s headphone/recording output with the incredibly detailed, natural speaker simulation.

Two channels take you from chiming cleans, through rich crunches to heavy overdrive tones and singing leads. Designed by the same UK R&D team as Blackstar’s high-end valve amps, using the same level of testing and critical listening tests as all Blackstar products.

The Debut Series amplifiers have been designed to react to your guitar volume exactly like a valve amp would, providing ultimate sonic control and access to an infinite palette of tonal subtleties.

Valve or Tube amps use vacuum tubes to derive amplification where solid state uses electronic transistors. Valve amps generally cost more money as they are a more complex build and require more maintenance than their solid state brethren. Tubes usually give you a smoother response than solid state does but, don't count out the solid state yet. Solid state amps have been around since the 60's and have improved greatly over the years. Solid state amps are generally cheaper and much lower maintenance and therefore are more reliable when performing. Ultimately it comes down to personal preferences. Both types of amps are used regularly by professional musicians alike.

What does ISF do on Blackstar Amps?

ISF is a tone feature exclusive to Blackstar. Infinite Shape Feature or ISF basically will shift your tone between the "American" setting and the "British" setting. The American setting is tighter, more focused, and percussive where the British setting is woodier, warmer and has a softer crunchy breakup. You can adjust this feature to your personal mix between the two settings.

What is amp modelling?

What is the difference between Overdrive and Distortion?

Overdrive is literally what you get when a tube is pushed beyond its voltage limits causing a clip in the top of the waveforms resulting in a slight warm, fat and sometimes, sizzly tone. Overdrive pedals recreate that tone. The harder you strum, the angrier it sounds, so to speak. Distortion basically adds more clipping stages than overdrive and therefore has a more distorted tone. The more clipping stages added the more distorted the tone is. There is less definition with distortion as there are more overtones created because of the hard clipping.