X
This site uses cookies to provide and improve your shopping experience. If you want to benefit from this improved service, please opt-in.
More Info
Accept Cookies
ONLINE FINANCE on orders over £250
NO QUIBBLE RETURNS buy with confidence
NEXT DAY DELIVERY order before 2pm, Mon-Fri 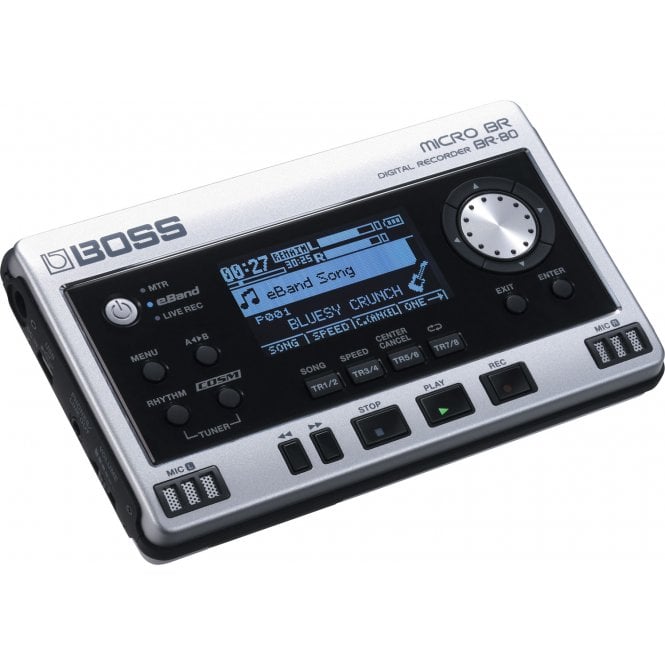 Code: 677902
Small enough to fit in your pocket, the Boss MICRO BR BR-80 is the ultimate new portable recording and jam-along tool for guitarists and other musicians.

Item in Stock Item out of Stock | IN STOCK Contact Us For Local Store Availability
Order within for delivery on Friday 28th January
Loading...
Check Stock in Stores

Next Working Day Delivery order before 2pm, Mon-Fri
Pay It Up With Finance available on all orders over £250
No Quibble Returns Return within 14 days for a full refund
Small enough to fit in your pocket, the MICRO BR BR-80 is the ultimate new portable recording and jam-along tool for guitarists and other musicians. It’s equipped with three modes to create, record, and perform your music: an eight-track MTR (Multi-Track Recorder) mode; an eBand mode for onstage backing tracks and phrase training; and a Live Rec mode for instantly capturing high-quality stereo recordings. You can even combine the three modes seamlessly. Record your phrase ideas using Live Rec mode, for example, and then import the recordings into MTR mode to use as foundations for song production. Once you’ve added tracks, import your finished songs into eBand mode for backing-track accompaniment at the gig. The MICRO BR BR-80 portable pocket studio is truly a must-have for all musicians!


The Complete Studio To Go
Don’t be fooled by its size — this little studio is loaded! The MTR (Multi-Track Recorder) mode offers 64 V-Tracks with eight simultaneous playback tracks. In addition, a dedicated stereo rhythm track is provided, as well as an onboard library of great grooves to choose from. The intuitive user-interface continues the simple-to-use tradition of BOSS’ acclaimed BR series, with a graphical design that follows the layout of a conventional recording console. With EQ, reverb, and mastering tools plus, world-class COSM amps and effects for guitar, bass, and vocals the MICRO BR BR-80 is ready to deliver complete, pro-quality recordings with ease.

Virtual Jam Band
The MICRO BR BR-80’s eBand mode offers musicians a fun way to play along with their favorite songs. With the bundled eBand Song List Editor software, you can import CD, MP3, and WAV audio files from a computer via USB. The Center Cancel function can be used to minimize the volume of pre-recorded vocals and solos for play- and sing-along enjoyment. eBand mode is also an excellent partner for musical training, as it lets you record your performance adjust playback speed and/or pitch as desired.

PC Companion
The ultra-flexible MICRO BR BR-80 portable studio can be used as a stand-alone digital recorder or as audio interface for a USB-equipped computer. Cakewalk’s SONAR X1 LE DAW software (for Windows) is bundled with the MICRO BR BR-80, giving users a full-fledged PC-based music production environment with latency-free recording and a powerful range of COSM amps and effects. Furthermore, the bundled Wave Converter software lets you easily exchange data between the MICRO BR BR-80 and SONAR X1 LE or any other DAW.

Code:
Technical
What is the difference between Waza Craft Boss pedals and other Boss pedals of the same name?

Waza Craft pedals are completely redesigned by the original designers using the original circuits. Each pedal is optimized to its fullest potential.  You have the tried and true Boss sound that you have come to expect with some added custom features not available on the original models.

What is the difference between Overdrive and Distortion?

Overdrive is literally what you get when a tube is pushed beyond its voltage limits causing a clip in the top of the waveforms resulting in a slight warm, fat and sometimes, sizzly tone. Overdrive pedals recreate that tone. The harder you strum, the angrier it sounds, so to speak. Distortion basically adds more clipping stages than overdrive and therefore has a more distorted tone. The more clipping stages added the more distorted the tone is. There is less definition with distortion as there are more overtones created because of the hard clipping.

Terrific recorder but still learning some of the intricacies.