X
This site uses cookies to provide and improve your shopping experience. If you want to benefit from this improved service, please opt-in.
More Info
Accept Cookies
Kenny's Music Blog Interviews An interview with Colonel Mustard and the Dijon Five
Menu
Interviews, News

An interview with Colonel Mustard and the Dijon Five

How and when did the band form?
The band were formed at the North Lanarkshire Roller Derby in the late 90’s. The East Ayrshire freestylers had been invited along as there was a dance off to end all dance offs. A ping pong competition and a bouncy castle ensued. Somehow, things all got muddled up and mixed together and the 2 rival councils forged an unbreakable bond and pledged to learn instruments and form the greatest crowd participation band ever formed. After an unorthodox game of Scrabble and a mustard eating competition amalgamated, we knew we were going to be Colonel Mustard & The Dijon 5!

Where can we listen to your music?
YouTube, Spotify, and on CD, but most importantly live at venues and festivals up and down the country, and across the universe.

Tell us a bit about your songwriting process.
Quite a few of us write. Sometimes we’ll come up with stuff in jamming, listen back and pick out bits to elaborate on.

Three examples of writers in the band are-

Morty usually comes with a fairly formed tune that we all put our different parts to. I’ll come up with lyrics and a melody (although sometimes he’s got a concept or a funny line he wants me to elaborate on). The band then jam it, working out their parts.

Chris comes up with a lot of great music just noodling away in the house. Listening to different types of music and immersing himself in it, from flamenco to ska, funk, Afrobeat, you name it. He’ll generally have some parts worked out, and again I’ll come up with lyrics and melodies once we start jamming the tunes, or try and fit something in that I’ve already written.

Disco Colin comes up with tunes at jamming and at home. He usually goes off it once we all start getting into it, but we persevere because he’s got a good ear for a tune and melody.

What do you listen to on the way to a gig?
Our pals Shaka Loves You do a mean playlist/mixtape. In the van we’ve usually got tons of CDs or on our phones with playlists. Badges has got some brilliant funk, soul and disco stuff: Teddy Pendergrass who did all the best singing on the Harold Melvin & The Bluenotes stuff, some Motown, Marvin Gaye. Snoobs is a mean DJ as well with an eclectic taste: Hot 8 Brass to the Spice Girls. When it’s a long drive DJ5 usually pulls out some dance classics or some of the Fatboy Slim mix albums.

Which of your songs do you enjoy playing the most?
These Are Not The Drugs (You Are Looking For) is one of my favourites. It’s got a great acid house beat folk can get down to, and it’s a song with a message and, by the end – when the band and crowd are singing the outro ‘Everyone’s happy, everyone’s smiling, no-one here is sad any more’ – for that moment there’s always a beautiful communal feeling and we all forget our troubles. Moments like that in life are priceless.

How did you come up with your name?
I refer you back to the unorthodox game of scrabble and mustard tasting competition.

If things go exactly to plan with the band, what would you like to achieve?
I’d love to play Glastonbury Festival and tour more of Europe and the world. Release at least another 2 albums and just keep playing the amazing British festivals we’ve been fortunate enough to build up a loyal following at.

Which bit of music gear could you not live without, and why?
From DJ 5 (Beats): laptop and sound card. It’s good for putting demos together as well as performances.

Kirstin Badges (Trumpet): Silent Brass Mute – no one will really know what that is.I get to play any time in the day or night and it keeps my neighbours happy

What’s your favourite brand of music gear, and why?
DJ5: old skool here – Technics! Responsible for the birth of so many live performers.
Badges: Yamaha (cos no one will know any of the other brands like my trumpet – Schilke)
Disco Colin: Yamaha, from guitars to speakers to hifi to anything, they are always 9 out of 10

What’s the best gig you’ve ever been to, and why?
DJ5: Daft Punk at Rockness 2007. Nobody that gathered in that tent really knew what to expect. The stage show was the first of its kind with the LED pyramid, and the tunes were banging! An “I was there” event.
John McMustard: Radiohead 1997 at Glastonbury. So good that I contemplated not making music for some time, as how do you top that? Over time I realised you need to do your own thing.
Badges: Live 8 because I got to see the Godfather of Soul, James Brown, before he died.

What was your most disastrous gig ever, and why?
We played a brilliant festival in Arran called Deoch An Dorus that will hopefully return one day. It was the first festival of the year where most people over-do things. The band took this to the extreme… From our 13 piece band only 3 members actually managed the gig. Luckily we had a number of subs who were able to stand in. Some of them listened from the floor of our mini bus in stitches. One of the guys tried escaping from the island on a bike he’d acquired. This was following the madness of seal-gate during the day. Some really funny memories of that though, despite it being a disaster.

And two no longer with us: the ABC and the Arches

What are your favourite Scottish recording and / or rehearsal studios?
Glenwood Studios Castlemilk and16 Ohm Haghill for recording
Berkley for rehearsing in style
Carlton Studios for old school cork wall vibes. 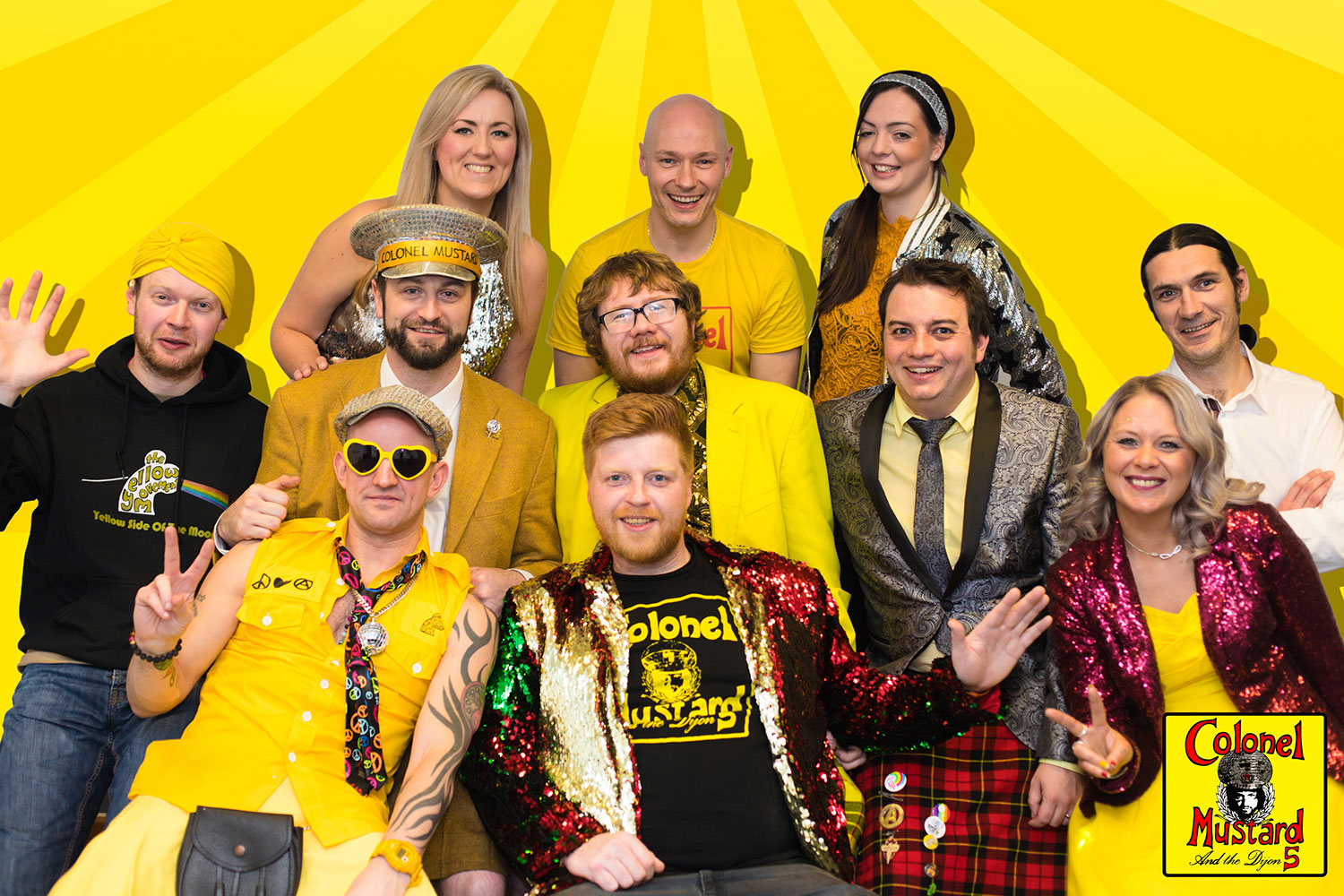 What’s your personal favourite song you’ve released (or are about to release!)?
From the Dijon 5 we’ve got a new stomper called We Are The Dinosaurs (Shut Your Geggae And Listen To The Reggae) that’s not yet released.
From my John McMustard Sports Mixture album, DJ5 has written me a tune called Scottish Swimmer / German Efficiency about when I nearly drowned as a child, but it’s to a banging beat that reminds me of Underworld. That’s been a fun one to work on. Badges: One we’ve played live for a while but not yet released – Gonna Be Myself Cos That’s Who I Am

If you could only listen to one artist for the rest of your life – excluding yourselves – who would you pick?
No contest, for me it’s the Beatles. Their back catalogue is so eclectic and life changing and consistently brilliant and innovative. I could never tire of listening to them. From the age of about 8 to 14 they are the only band I listened to.

How do you promote yourselves?
Is there any method you’ve found that has worked particularly well? In the festival world it’s word of mouth that has been amazing; more and more people come and watch us every year. We’ve got a strong social media presence. The daft videos we make usually get the best response.

What’s next for you guys? Any gigs or releases coming up?
The Dijon 5 next album is scheduled for a January release. It’s been exciting working with Chvrches Front of House engineer Paul Gallagher. He’s got loads of great old synths and drum machines, a wise head on his shoulders, and the rare ability to get on with every member of our madcap band. His production on the last couple of singles has been brilliant.

The guys will hate me for shamelessly plugging this but I’ve also just finished my first solo album called Sports Mixture with lead single ‘I’m A Vegetarian But I Don’t Like To Talk About It (Morrisey Is Murder)’ a song from my Edinburgh Fringe Show Colonel Mustard & The Big Bad Wolf for release on Button Up Records on 2nd Aug.