An interview with Dunfermline pop band, The Moon Kids

Having recently played shows in the USA, The Moon Kids are back home gigging relentlessly and have new music just on the horizon! We caught up with vocalist David Barr to chat about how they started, the guys in the band and, er, Grange Hill.

Who’s in the band, and what do you each play?
David Barr (vocals), Connor Whyte (Guitar), Scott Keating (Bass), Yogi Adamson (Drums)

How and when did the band form?
This line up of The Moon Kids under a year. but we’ve been together for around 5 or 6 years overall. Each member has joined at different stages. Connor & Yogi were fans of the band before they joined.

Where can we listen to your music?
Spotify, YouTube and all the other online platforms. The best way, though, would be to catch us live.

Tell us a bit about your songwriting process.
Sometimes I’ll write a song from start to finish, other times I’ll bring the bones of a song into the band and we’ll work on it together. Occasionally I’ll ask Yogi to play a specific beat then we’ll work on top of the beat and most recently we wrote a song around a bass line we were jamming in rehearsals. I write the lyrics and melodies, and as a band we will fire around ideas for the instrument parts.

Name three other bands / artists that you’d say have influenced your music.
The La’s, The Happy Mondays, The Fall

What do you listen to on the way to a gig?
Got to be Chicken Man, the Grange Hill theme tune… you may laugh but that groove!! That tune has a real cheeky attitude about it. I love it.

What sort of music do you particularly dislike, and why?
I listen to all genres of music. My taste is pretty eclectic. So there isn’t really a sort of music I hate. I guess I just hate music that is bland and unoriginal. Music that lacks groove or melody is pointless to me… and I get a bit wound up by really derivative bands that steal too much from their influences. I’m quite rock n roll at heart so I always think music should have an edge!

Which of your songs do you enjoy playing the most?
We have a new song called E.N.E.M.Y and I just zone out when we perform it. It connects with me hard. It’s full of passion and attitude. It’s edgy and I can express myself. I like singing the lyrics too… they are poetic and they don’t beat around the bush. It’s about the demise of a king.

How did you come up with your name?
We were bouncing ideas around in the studio when we were recording our first EP and we thought The Moon Kids sounded like a gang name. We were researching fairground gangs at the time and we had a vision in our minds of The Moon Kids being kind of like a bunch of rogues in leather jackets. It was only supposed to be temporary because we had our first gig coming up but… It’s kind of just stuck.

If things go exactly to plan with the band, what would you like to achieve?
Number 1 on the list would be to release a timeless album. An album that can inspire young people and turn them onto guitar music, in the same way that all of my favourite albums have. Of course to make a career out of our music would be a dream… touring, being in the recording studio with amazing producers etc all the aspects of being in a full time band beats working a day job. So if we could achieve that then we’d be more than happy. 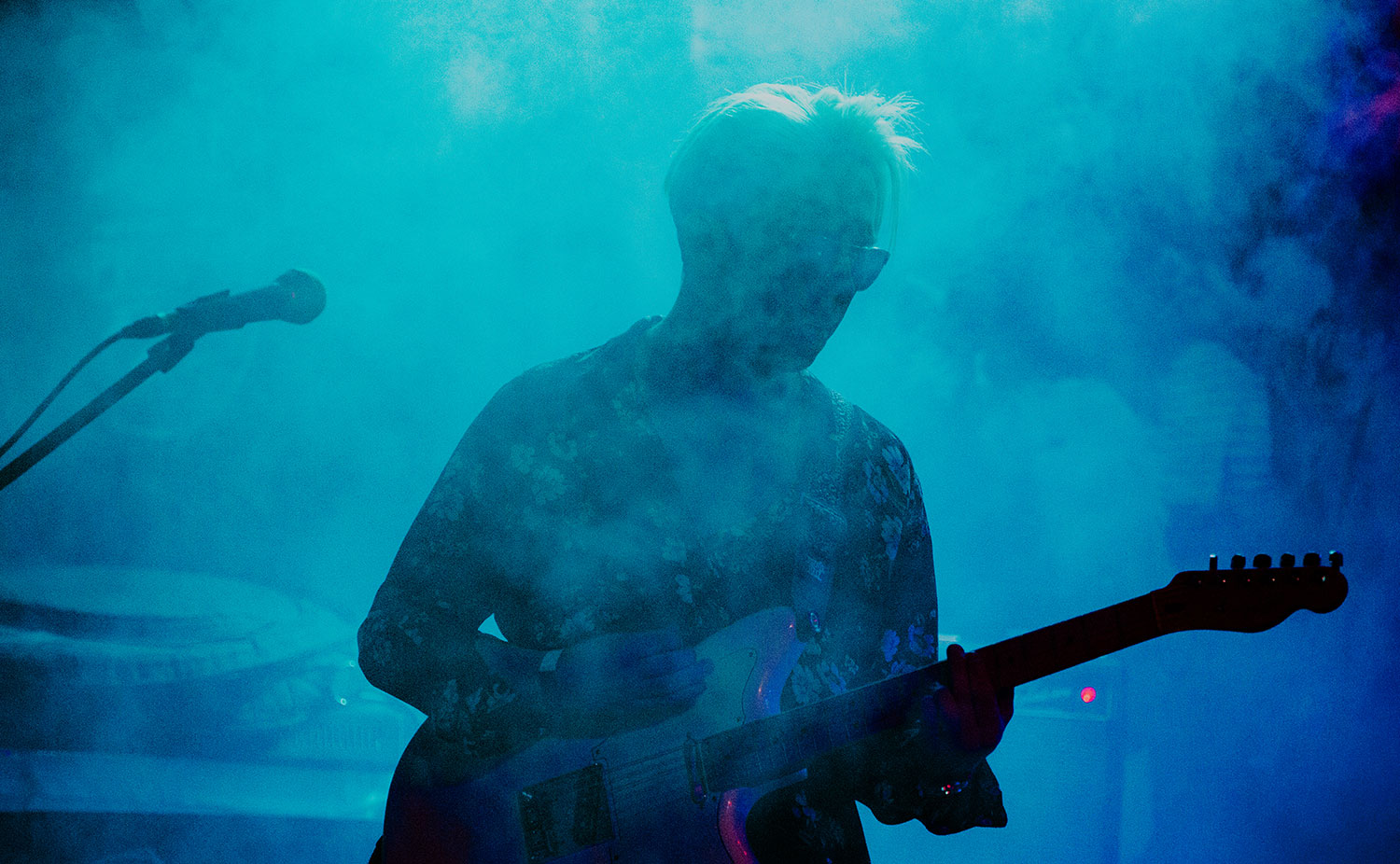 Which bit of music gear could you not live without, and why?
My Gibson acoustic. I use it all the time for writing and I’ve penned a lot of our songs on it.

What’s your favourite brand of music gear, and why?
I’d say as a band we really like Fender gear… I say this because Connor uses all Fender guitars and our amps are Fender too. It just sounds great and looks cool… Even the logo is cool.

What was your best gig ever, and why?
We played a sold out show in Hollywood in April. That was really special. We performed a showcase in front of a whole host of celebrities and industry professionals, so of course that was a really cool experience for four lads from Dunfermline. We didn’t get a soundcheck and we were really nervous but we nailed it and to this date it’s my favourite gig.

What was your most disastrous gig ever, and why?
We played a shocker at The Record Factory in Glasgow a few years back, nothing disastrous happened but there wasn’t a good vibe amongst the band at the time and the sound kept cutting out. None of us were enjoying ourselves on stage and I guess to date that’s been our worst show.

What are your favourite Scottish recording and / or rehearsal studios?
The Substation in Rosyth is where we began rehearsing and recording with Michael Brennan Jnr so I’d have to put that in there. Recently we recorded at Chambers Studio with Greame Young and we loved that session too. We have our own rented space in Leith above Mark Morrow Audio another great studio who again we’ve really enjoyed working with.

What’s your personal favourite song you’ve released (or are about to release!)?
Again I love E.N.E.M.Y and all the new songs we are writing but I think my personal favourite is a song called Rollercoaster People from our first EP. It’s a song that sticks in my heart for some reason. We don’t really perform it live anymore but whenever I hear it… It triggers a nostalgia in me. I remember the excitement of being in the studio for the first time. It was the first song I recorded in a proper studio and I still think it holds up as being a really great song.

If you could only listen to one artist for the rest of your life – excluding yourselves – who would you pick?
I’d pick The Beatles because they have a bit of everything… you can’t go wrong with The Beatles. There’s a reason why they get called the best band ever!

How do you promote yourselves? Is there any method you’ve found that has worked particularly well?
Mainly through social media and performing live. I will say though… although social media is a great tool to promote yourself but… they do exploit bands in the sense that you have to sponsor (pay) for your posts to really get seen. So there isn’t really a way around having to pay if you want to be seen outside of your local scene. This isn’t an ideal set up for musicians If i’m totally honest. But in saying that… It’s still a way of getting yourself out there.

What’s next for you guys? Any gigs or releases coming up?
We have a new single coming out on the 19th of July and we all be performing our single launch at The Voodoo Rooms in Edinburgh on the 20th.

Out of all of you, who would win in a fight? What would each of your fighting techniques be?
Well it goes without saying I’d win a fight. That’s the only way you get to be a singer. Its part of the initiation. If you can’t beat your band mates up then you shouldn’t be the singer! I think Yogi would win out of the rest of the guys though… By sheer brute force. I think his technique would be the classic ground and pound! Connor would go for the underrated eye poke and Scott would definitely be a bend the fingers back kind of guy!

Have you ever shopped at Kenny’s Music? If so, what did you buy?
Yes, we all have. Connor has bought an array of Fender guitars, mainly Strats and Jaguars. I purchased a really amazing Fender Hot Rod Deluxe amp in emerald green that has been an amazing purchase. I’m pretty sure Yogi got his kit in Kennys… It’s our local store in Dunfermline so we are regular customers.