How and when did the band form?
I started writing by myself, for myself, in maybe 2012. The others came on board quite naturally over time as I was collaborating with them as friends. Nick & I had played in a band together before so there was already that base. One of our former members Fraser became the person to bounce my songs off and then Lewis had a synth we were aware of, so he was asked to come along.

There was no fanfare or anything like that, we almost had no ambitions to put something out at first, over time however, we actually thought the songs we were writing and the instrumentation was a little bit special so decided to lay some tracks down, make a video and put out an EP. We were offered a large festival 4 days after we put out our first track, which was really exciting for a brand new band.

Where can we listen to your music?
In the house, garden, sing-along in the shower. Thanks to the power of headphones you could probably listen to our music in space / bottom of the ocean. A sealed conduit or breathing apparatus required for the last two.

The best way to listen to it would be on 12” vinyl. You can get our double EP from the Scottish Fiction online shop.

Tell us a bit about your songwriting process.
I’d say my process is to write things down when they come to me. The amount of times I’ll come up with something and forget to write it down can be a little frustrating, but I’m getting better at it. I lost my original lyric book some time ago but my new one is getting pretty full, so that’s a good sign. We’re pretty fluid when it comes to writing a song; process or constraints can be counter-intuitive for our type of song writing.

Name three other bands / artists that you’d say have influenced your music.
Let’s say Manchester Orchestra, Explosions in the Sky & Emmy The Great.

What do you listen to on the way to a gig?
Mitski blasted on full volume. After that, all bets are off, whoever has the aux cable will most likely torture the rest of us. If it’s Dave, we’re getting Hobbyhorse until our ears bleed.

What sort of music do you particularly dislike, and why?
Music is such a subjective thing and there’s always something from most genres I can connect with. I don’t want to be negative about music I don’t like, everyone’s doing what their trying to do so I can appreciate that.

Which of your songs do you enjoy playing the most?
I probably most enjoy performing Bonfire. It’s quite a triumphant set finisher that we have a bit of room to play around with live. Every song has it’s time though, it constantly changes from gig to gig.

How did you come up with your name?
I misheard the song name ‘Foreign Thoughts’ by There Will Be Fireworks when we were in the car coming home from the studio. It just stuck. I’m glad that I still have so much love for …Fireworks, so the name’s never lost its appeal for me.

If things go exactly to plan with the band, what would you like to achieve?
Release music until we can’t anymore & play shows we believe in. I’d like to do something visual as well, I’ve been toying with an idea for a short film.

We have no desire to take on the music industry or go for ‘that big break’ becoming the biggest rock stars in the world, it’s quite dead ended. What comes after? I wouldn’t want to get somewhere without all the good and bad stuff in between, I mean, what would I have to write about then?

If the day came where making music became my sole income that I could live comfortably off of, as well as being afforded the opportunity to travel the world with it & play to the people it meant something to, that’d be a dream outcome. If I’m still writing and releasing music with the band 10 years from now, we’ll be doing something right.

Which bit of music gear could you not live without, and why?
My acoustic guitar. As long as I have an acoustic, I can play a show. Simple as that really.

What’s your favourite brand of music gear, and why?
I really love my Kilobyte pedal made by this little independent american company called Caroline Guitars. They have some really cool stuff, all the pedals have such interesting concepts. My kilobyte is a delay with an infinite oscillation switch that can keep going until all the tubes blow on my amp (and have on a couple of occasions) but that’s part of it’s charm. 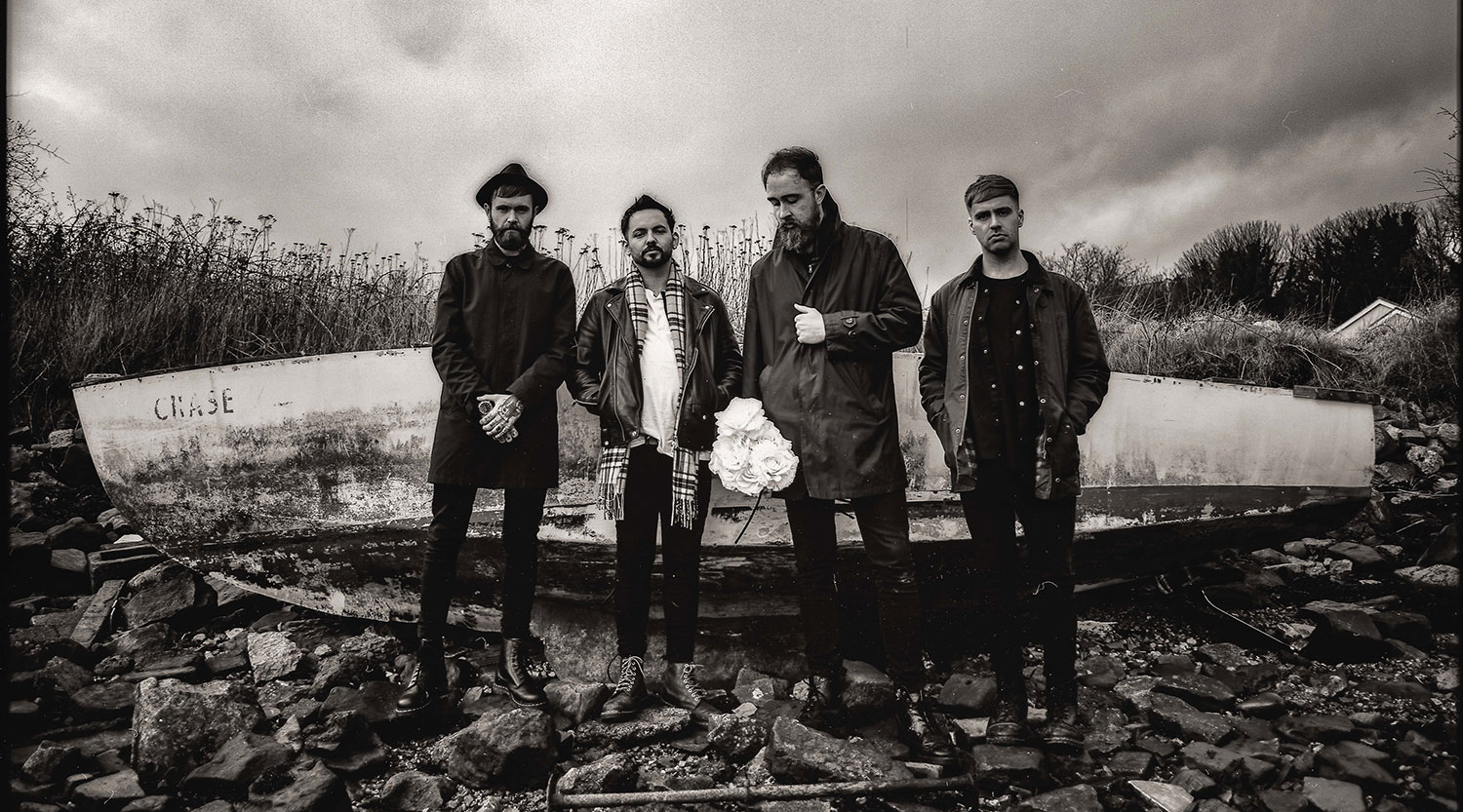 What was your best gig ever, and why?
It’s always easier to look back with huge fondness at some of the early gigs, the excitement is always heightened doing things for the first time. Wickerman or the first show we played in Middlesbrough, because it was so unexpected, would be up there for me. To see everyone singing along in a place you’ve never been before is always a good feeling.

What was your most disastrous gig ever, and why?
Well, I can’t really say it was a disastrous gig because it never actually happened. We were meant to play in this small town called Northwich in England during our last tour, but the entire town got shut down because of trouble that had been happening throughout the day with no police or security to stop it. I’m sure two pubs had already been destroyed and the group were working their way down the main street. We didn’t find out until we had loaded in, but the venue couldn’t have been nicer. A freak situation I’d hope.

We managed to sort out a last minute show in Liverpool the following day which turned out to be proper class. During soundcheck in Liverpool my OD pedal switch stopped working, but luckily I had a Big Muff Germanium on my board as a spare. It made everything sound even more wild. So it all worked out well in the end.

What are your favourite Scottish recording and / or rehearsal studios?
Post Electric with Rod Jones & 45-a-side with Bruce Rintoul are both great recording studios. The now defunct Old Mill Studios in Strathaven was a really special place for us when we first started recording, it was this converted theatre. Loopmaniac in Dunfermline is where we usually like to rehearse, Substation in Rosyth is another great place.

What’s your personal favourite song you’ve released (or are about to release!)?
Anything that’s released means I’ve already heard it too much. You’ll write, tweak, tweak some more, play it live a few times, head into the studio to record, listen to each component 50 times, listen to the mix until it’s how you want it, then the master… by the time a song is released I’ll have heard it countless times. My favourite songs are always the newest because they’re so fresh in my mind. I wrote a song last week that I’m really fond of at the moment. Saying that, Birthday Flowers II is my favourite that’s released. It’s stripped back and honest which I like.

If you could only listen to one artist for the rest of your life – excluding yourselves – who would you pick?
Yikes. It’d have to be somebody with quite an extensive back catalogue like The National or Magnetic Fields.

How do you promote yourselves? Is there any method you’ve found that has worked particularly well?
Getting out there and playing. I know it sounds old school, but now that the internet has every song and artist ever, things can get lost in the crowd. It’s almost come full circle in this way, there’s nothing like playing in front of a bunch of people who’ve never heard of you before & watching them come on side. Nothing beats the live experience.

What’s next for you guys? Any gigs or releases coming up?
We did a fundraiser for Tiny Changes and Andy’s Man Club in Dunfermline August 4th. It’s really heartening to see the local community getting behind such an important cause.

Then we play Party at the Palace in Linlithgow, that’ll be a really good one.

A show in Arbroath and then we perform at Outwith Festival on September 7th along-side some of my favourite artists – Billy McCarthy (Augustines), Idlewild, Siobhan Wilson etc..

Out of all of you, who would win in a fight? What would each of your fighting techniques be?
We’re lovers not fighters.

Have you ever shopped at Kenny’s Music? If so, what did you buy?
All the time. I like throwing my guitars off, so I’m usually taking something in for a repair job, but then I need to get strings, picks and the essentials. Before I know it, I’m buying synth gear I never knew I needed so badly. Always good for a coffee and a chat.