X
This site uses cookies to provide and improve your shopping experience. If you want to benefit from this improved service, please opt-in.
More Info
Accept Cookies
PLACE AN ORDER AND YOU COULD WIN OVER £1,500 WORTH OF MUSIC GEAR! Learn More
Kenny's Music Blog Interviews An interview with Orynthia
Menu
Interviews, News

How and when did the band form?
A long time ago, technically, although around 2015/2016 properly. We’ve shapeshifted a good bit since then but we (John and Liam) originally responded to an ad online. Over time, and after getting our friends involved, Orynthia came to be.

Where can we listen to your music?
Via the usual outlets online! We’re on Spotify, YouTube and Bandcamp amongst others.

Tell us a bit about your songwriting process.
It varies from song to song. Generally there’s plenty back and forth and rewrites before we’re happy. Then we carve them into stone to be preserved for eternity.

Name three other bands / artists that you’d say have influenced your music.
Hard to narrow it to 3! Especially as we all have such a varied taste. Let’s go with Vulfpeck, Haken and Stevie Wonder.

What do you listen to on the way to a gig?
That depends what the flavour of the week is, again differs between us.

Which of your songs do you enjoy playing the most?
Desperation/Aspiration is always great because people sing it back to us! Asides from that any new material that’s been played, you can tell people are into it.

How did you come up with your name?
It appeared to us in a dream, emerging from the oceans of thought. Or it was an old WiFi password. We forget.

If things go exactly to plan with the band, what would you like to achieve?
Being able to sustain ourselves through recording and touring ideally. Rob’s in it for an endorsement of original recipe Irn Bru.

Which bit of music gear could you not live without, and why?
We play through Fractal Audio Axe FX II units, all our tones are programmed via those so our set up would need a major rejig without them.

What’s your favourite brand of music gear, and why?
Strandberg Guitars, Liam is an endorsee.

What was your best gig ever, and why?
Definitely the Eruption Battle of the Bands final at Krakatoa earlier this year. Great crowd and we walked away with 2 grand.

What was your most disastrous gig ever, and why?
We played a festival in Aberdeen a couple of years ago. One of the newer songs we played completely fell apart towards the end. Funny looking back on it now.

What are your favourite Scottish recording and / or rehearsal studios?
As mentioned, MV, as well as Captain Toms are great. Shoutout to D-Range as well, we recorded the vocals for the EP there. 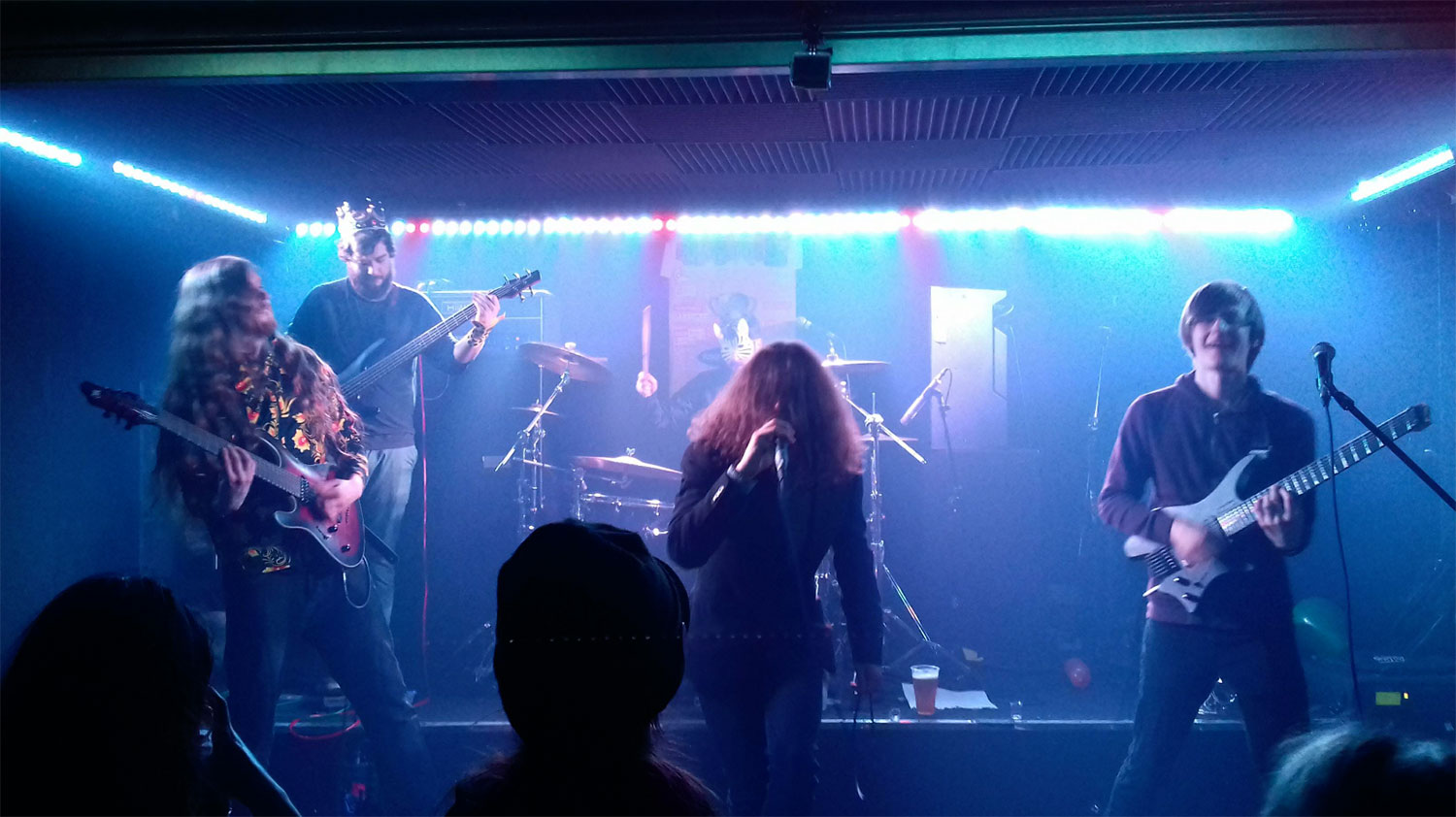 What’s your personal favourite song you’ve released (or are about to release!)?
Kismet from the EP is great purely for the goblin section alone, so much fun. The new material will top it though.

If you could only listen to one artist for the rest of your life – excluding yourselves – who would you pick?
IHLO

How do you promote yourselves? Is there any method you’ve found that has worked particularly well?
Constantly punt. Be a living meme.

What’s next for you guys? Any gigs or releases coming up?
We’ve been busy with other projects. Liam tours with Sithu Aye, Andy and Rob are promoting IHLO and John has Gypsy Roots. On top of that, we’ve been writing for our upcoming album, which is nearing the demo stage. We’ve not played since Eruption, but we’ll be announcing some exciting things shortly. Perfect time to follow us online!

Out of all of you, who would win in a fight? What would each of your fighting techniques be?
We fight all the time. Michael is a dominant warrior of steel. Andy scratches.

Have you ever shopped at Kenny’s Music? If so, what did you buy?
Oh yes! Most recent purchase would either be a Roland TD-1 DMK or a Sigma 000 series acoustic.