An interview with Scott Wallace

Scott Wallace is a 21-year old singer songwriter from Aberdeen who has spent the last few years performing his music to crowds around the country. Recently he was shortlisted from hundreds of entries into the last ten for the BBC Scotland Singer/Songwriter of the Year Award.

We caught up with him to discuss the past, present and future of his career…

Describe your music in three words
Catchy, real and relatable.

Where can we listen to your music?
My website is http://scottwallacemusic.com which includes all of the links to my music (which is available from all major digital outlets).

How and when did you first get into playing music?
I was out for food with my parents when I was around 12 years old and I was messing around on my dad’s phone. I came across a video of John Mayer playing the solo of his song ‘Waiting on the World to Change’ at a live show that he played in Los Angeles. I was blown away by his guitar playing and the live performance of the song. When I got back home I immediately checked out his other music online. I then decided to pick up the guitar, and have never looked back.

Have there been any particular people (e.g. teachers / relatives) who helped you / inspired you?
My friend Ross Watson has helped me a lot in my career – encouraging me to continue to improve and get better at what I do. I never studied music in school. However there were a couple of teachers who knew that I was into music and encouraged me to pursue it in some capacity. My girlfriend is also involved in the arts so she’s always supportive and understands that the industry can be difficult. My family were initially apprehensive of my plan to pursue a career in music. However, once I started gigging they came around and are very supportive.

Tell us a bit about your songwriting process.
I really can’t describe it, sometimes ideas just come to you like that and sometimes you’ve just got nothing. I generally come up with the melody first and then add lyrics but it can sometimes happen in reverse. I don’t have much music theory knowledge. However I do believe in keeping things simple with what you’re trying to say.

Name three other bands / artists that you’d say have influenced your music. What is it about them that you admire?.Again, John Mayer has been a major inspiration for me. I admire his guitar playing and I can relate to a lot of his songs on a personal level – an important trait of a good songwriter.

David Gray is another incredible artist, I saw him live at the Glasgow Royal Concert Hall earlier this year. He put on a great show and I think he’s an amazing singer/songwriter.

KT Tunstall is an artist whose music has been in my life for years and earlier this year I got the opportunity to see her live at the Music Hall in Aberdeen. This only gave me more respect for her and her music. She’s a huge credit to the Scottish music industry.

Which of your songs do you enjoy playing the most?
I like playing my song ‘Will You Mean It?’ live. If I’m playing to a crowd that have heard my music before then they’ll most likely know this song. If someone who hadn’t heard my music was at one of my gigs then they’d probably at least know the chorus to that song by the time I’ve played it. It’s always great when you’ve got people singing along to a song that you’ve written!

If things go exactly to plan with your music, what would you like to achieve?
I’d really like to play bigger gigs and be booked for more festivals in the future. I will get a couple more tracks under my belt and release an album that I’m happy with. It would be great if this album went on to be successful.

Which bit of music gear could you not live without, and why?
I love my Freshman acoustic. I have had that guitar for years and it has randomly been signed by The Stranglers when I played on the same line up as them at a Brewdog AGM festival. It was the guitar that I first started playing gigs with and it’s still going strong today.

What’s your favourite brand of music gear, and why?
I would say Fender. Both their electric guitars and amps are great and, of course, iconic.

What was your best gig ever, and why?
My best gig would have to have been at The Lemon Tree with Sofar Sounds. I performed at this gig back in February and it’s the first time that I played my new song ‘Anything For You’ live. I think it went down well and I’m fortunate to have a video to prove it. Sofar Sounds gave me the option of recording one song from my set so I was bold and chose my newest one. I think it paid off though and I’m looking forward to being able to share the recording – it was a really cool thing to be a part of.

What was your most disastrous gig ever, and why?
It would probably be a gig that I played years ago at Drummonds. Halfway through one of my songs, I snapped two strings. That was game over and I just had to stop the song and have a break.

What are your favourite Scottish recording and / or rehearsal studios?
I’ve recently recorded my new single in Post Electric Studios with Rod Jones from Idlewild. It’s based in Leith and everyone there knows what they’re doing and makes you feel very welcome.

My favourite rehearsal room would have to be Captain Tom’s in Aberdeen. Tom is a good guy and cares a lot about what is going on in the Aberdeen music scene. 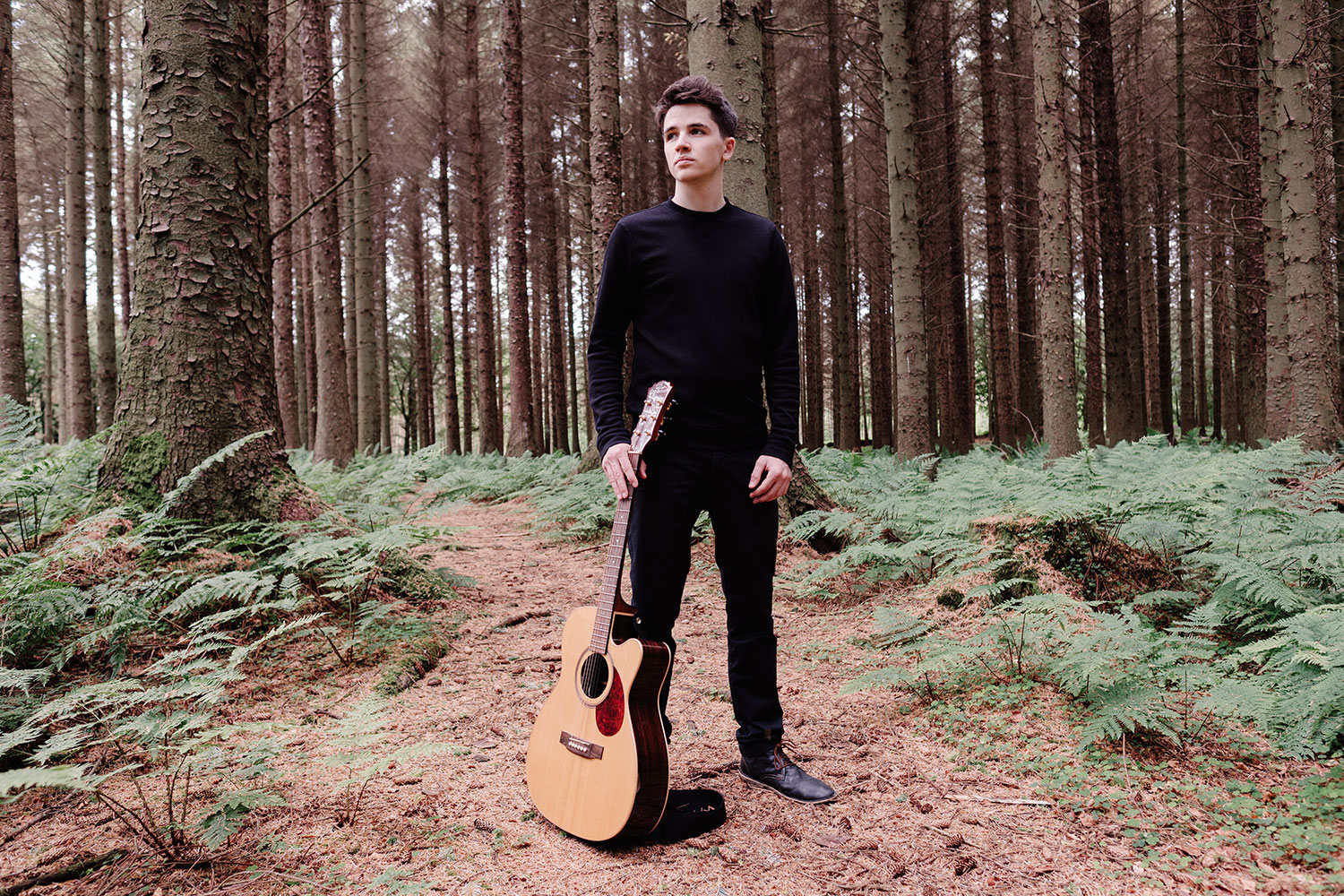 What’s your personal favourite song you’ve released (or are about to release!)?
I’m going to release my new song ‘Anything For You’ soon, I haven’t decided on a date yet. However it should be announced very shortly.

If you could only listen to one artist for the rest of your life – excluding yourself – who would you pick?
And again, John Mayer.

How do you promote yourself? Is there any method you’ve found that has worked particularly well?
I’m quite bad for not being active on social media but generally nowadays it’s the best way that you can make yourself known. I’m a strong believer in playing gigs though. If people hear you live I generally think they’re going to pay more attention and respect you as an artist.

What’s next for you? Any gigs or releases coming up?
My main focus right now is to get to the next stage in the BBC Singer/Songwriter of the Year Award that I’m currently involved with. I want to release my original song that I entered into this competition. However if I hold off and am able to win the award then part of the prize is that the BBC will create a promotional pack for your song. This would be great. Either way, my new single ‘Anything For You’ will be out soon.

How did you go about getting involved with the BBC Singer / Songwriter awards?
Back in May I submitted a recording I had of my song ‘Anything For You’ as well as a cover song. This was then shortlisted by 5 judges including Fran Healy of Travis and TRNSMT promoter Geoff Ellis. The shortlist of 10 singer/songwriters now goes to a public vote, with the top four from this vote going through to the final which is on Thursday the 26th of September (BBC Music Day). It would be great if anyone who likes my music could vote for me when the voting opens on the 2nd of September!
(Vote for Scott here – www.votescott.co.uk!!)

How does it feel to have got into the final 10?
It’s an amazing feeling to have one of your songs recognised by credible industry professionals. Like anything in the music industry, you try to take every opportunity that you come across to get further in your career. I’ve been lucky enough to get this opportunity and hopefully more great things will follow from it.

Have you ever shopped at Kenny’s Music? If so, what did you buy?
I shop at Kenny’s regularly and just before my debut EP release show I bought a beautiful Taylor acoustic that my friend Fraser Macaulay sold to me (he used to work in the Aberdeen store). I’ve played this guitar for a long time and it’s always been reliable for gigging. The staff are always very helpful and it’s great to know that Kenny’s Music is so supportive of local musicians.