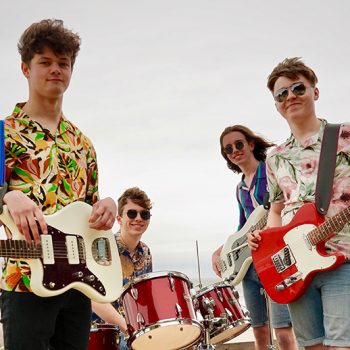 An Interview with The Zebecks

The Zebecks are a four-piece Indie Rock band hailing from the North East of Scotland, releasing catchy, riff-heavy music. We caught up with them to discuss their plans for world domination… Describe your music in three words. Daniel: In three words I would describe our music as ‘energetic’, ‘raw’, and ‘jangly’. Who’s in the band, and what do you each play? Daniel Thomson: Vocals, rhythm guitar Hayden Peace: Lead guitar Max Robertson: Bass guitar Aiden Smith: Drums How and when did the band form? Daniel: Aiden and I have known... Read More

An Interview with The Downshifts

Describe your music in three words. We would probably describe our music as stripped-back, energetic, and powerful.   Who’s in the band, and what do you each play? Our band is only two people, consisting of guitarist/vocalist Oonagh Griffiths and drummer Marcus Somerville. How and when did the band form? The band formed in the Spring of 2020, just as the first lockdown started due to the virus. It was especially hard starting off at this time, but we have not let it get in the way of our passion... Read More

Christian Madden is a professional keyboard player, currently playing for none other than Liam Gallagher. Prior to this, he was one of the founding members of the Warner-signed band The Earlies, and he has played with TOKOLOSH, Cherry Ghost, Jimi Goodwin, Paul Heaton, King Creosote and many more. He also somehow finds time to release music under his own name. We talked to him about how he got into music, what makes a successful pro musician, and what rehearsing with Mr Gallagher is really like… How did you first get... Read More

An Interview with Aaron King

Describe your music in three words.I’d say ‘chill, honest, real.’ Who’s in the band, and what do you each play?I am the only member of this project and I sing and play guitar, although Calum Thomson is featured on the track – he is the drummer in my band Gypsy Circus. He will make more appearances in future songs, hopefully! The producer of ‘Señorita’, Rod Jones (of Idlewild) helped out with keys and organ. How and when did this project form?I’ve been in my band Gypsy Circus since I was... Read More

An Interview with Mt. Doubt

Edinburgh band Mt. Doubt are making waves, garnering regular airplay on BBC Scotland, as well as 6Music, Amazing Radio, XFM, KEXP, and more. Their songs cover subjects as diverse as mental health, the universe, and house plants. We caught up with them shortly after the release of their latest album, Doubtlands. Describe your music in three wordsBearable, on occasion Who’s in the band, and what do you each play?On our most recent record, ‘Doubtlands’, the band has been; Myself, Leo Bargery – Vocal, Guitar, Piano Annie Booth – Vocal, Acoustic... Read More

Future Fridays is about championing local unsigned music. If you’d like to be considered for inclusion, full info and entry form can be found here. This week, we’re featuring the band Conflict Hope from Anstruther with their track “Calm Before the Storm”: So, who are Conflict Hope?We are a Hard Rock / Punk band who were formed in high school by Jake Rodger (lead vocals and guitar) and Inaxio Abecia (backing vocals and guitar). There have been various members come and go throughout the years, but we both continued to... Read More

With painfully catchy new single Cherry recently released, we caught up with Thurso indie rockers Forgetting the Future to find out a bit more about what makes them tick… Describe your music in three words. EXPLOSIVE, BRIGHT and BANGING! Who’s in the band, and what do you each play? Forgetting The Future consists of four northern townie boys: Robbie McNicol as the front man, Jamie Mackay on the Lead Guitar, big tall Max Paul on the Bass Guitar, and Connor Wilson on the Drums. How and when did the band... Read More

In the latest episode of our Lockdown Diaries series, we chat to Edinburgh-based Madrid-born pianist, singer and songwriter Amaya López-Carromero, otherwise known as Maud the Moth, about what she’s been up to over the last few months. Have you been making more or less music since lockdown began?My latest album, Orphne, took so long to be finished that when things started to become clearer with the release, I instantly felt more and more focused on writing new stuff. The lockdown caught me in the middle of this process, and it,... Read More

An interview with Cucharas

Following the release of their debut single, Black and Blue, we caught up with new Dundee band Cucharas to talk about their music. Describe your music in three words.Ominous, energetic and catchy Who’s in the band, and what do you each play?We’ve got Toyah Swan on vocals and rhythm guitar, Ben Connelly on lead guitar, Kirsty Taylor on keys, Camilo Nicolas on bass and Mark Anderson on drums. How and when did the band form?We all met in our music course in Perth last September and started slowly building up... Read More

We’re all about celebrating upcoming musical talent here, so each week we’re featuring some music made by our customers. (Want to be considered for inclusion? Read this post to find out how.) Today, we’ve got a track from Dundee singer/songwriter Adam Elder, called Sugar and Spice. This is what he says about it: “I wrote and recorded the song and music video in a week in my bedroom using a cheap audio interface and a free DAW with whatever instruments I had handy in my room. It was a fun... Read More