Eastman Guitars are not as well known as many of the other brands we stock here at Kenny’s Music, so we thought it would be worth putting together a little history of the company and an overview of the range of products we stock. Have a read if you’re looking for a guitar that’s a little bit different to the big players..

Eastman was started in 1992 by Qian Ni, a graduate of Boston College of Music. His initial plan was to import stringed instruments such as violins, violas and cellos from China, but he had a longer term vision: to use his connections and understanding of music to build the best possible instruments for every musician, no matter the level, no matter the social status.With this in mind, he set up a workshop in Beijing where traditional instrument building techniques were used to build high quality violins using chisels, gougers and rasps, rather than the machines that other factories were using. 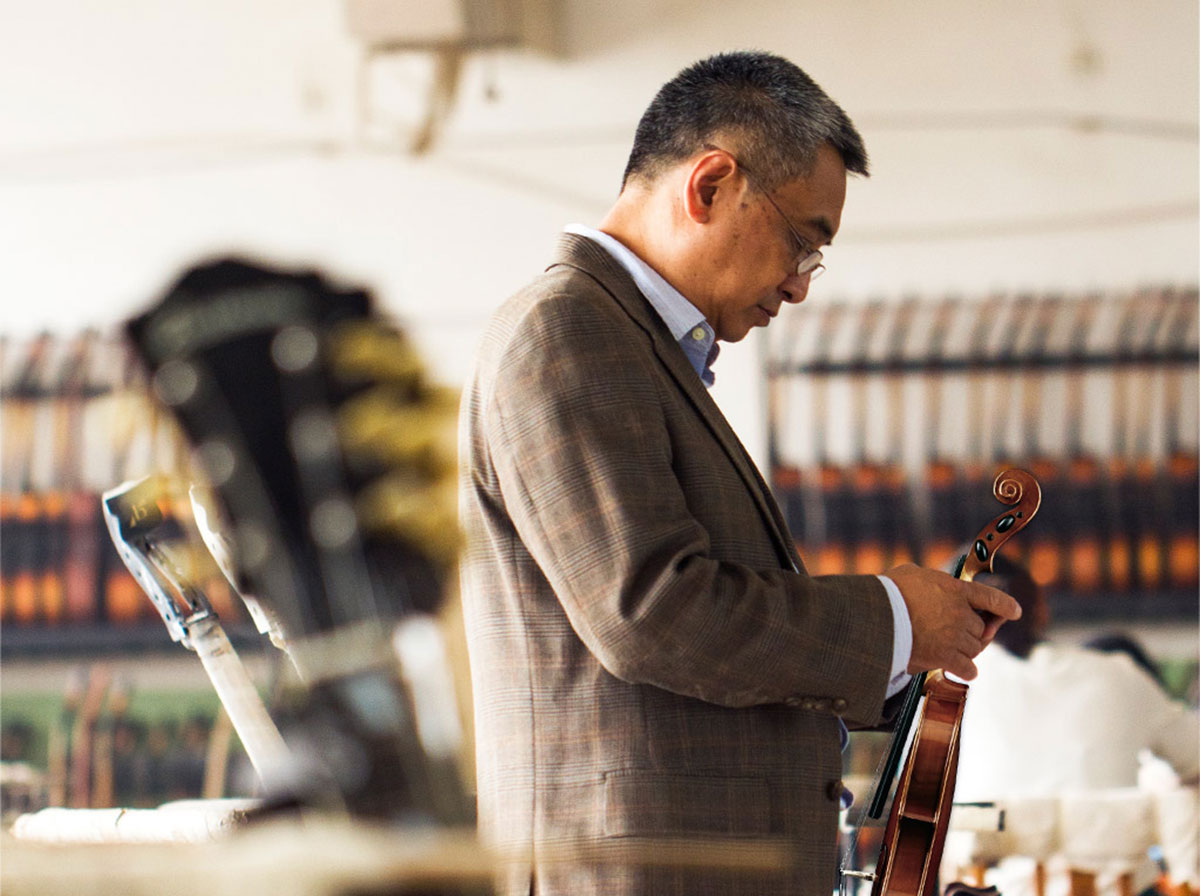 In 2002, Qian Ni realised that his production facilities were now of such a high standard that he could turn his attention to other instruments – specifically Mandolins and Guitars. To make sure what he produced was of the very highest quality, he enlisted two of the world’s greatest luthiers: Mark Lacey and Otto D’Ambrosio. From then on, things gathered pace quickly, and in the last few years there’s been a huge growth in interest in the brand amongst the press and guitarists in the know.

Although Eastman do an impressive range of electric solid body guitars and mandolins, currently we’re just stocking their acoustic models (though we’re keen to get the electrics in nudge nudge, purchasing department…).

When it comes to acoustics, Eastman offer broadly two different types of guitar: the Traditional Series, and the AC Series.

Traditional Series instruments, as their name would suggest, are all about classic guitar design, inspired by the vintage (cough Martin cough) guitars of the ‘30s and ‘40s. The AC Series, on the other hand, are more modern in their design and approach, and are more akin to Taylor guitars.

When it comes to buying an acoustic guitar, the shape of the instrument should be one of your main considerations. Do you want something small and light for delicate finger-picking, or do you want a monster that will get you heard on the other side of the street?

Eastman guitars come in a variety of different shapes, from Jumbo to Travel size guitars and, again, you can generally tell the shape from the product name: guitars ending in D are dreadnoughts, OO are smaller, parlour-style guitars. All of the AC Series guitars and the entry-level (and gorgeous!) PCH Series guitars are Grand Auditorium style, following Taylor’s lead from back in 1994; easy to play and not too cumbersome.

Once you’ve got a feel for the style of guitar you’re after, it’s all about the appointments and the tonewood used in the construction. As an example, Eastman’s AC Series starts off with AC122-1CE (retailing for £599 at time of writing), which features a solid sitka top and sapele back and sides. Move up to the AC222CE (retail £689) and you are afforded solid ovangkol back and side, and jump to the AC422CE (retail £1149) and you get rosewood back and sides, 5-ply ivoroid fingerboard binding, and a Fishman Matrix pickup, rather than a Fishman Sonitone.

Amongst the range of Eastman acoustics we’re stocking at the moment, if you look closely you’ll see a couple of additions to the range that don’t fit into the any of the series above: the limited edition Slope Shoulder series (the E1OOSSLTD and the E1SSLTD). These are strictly limited solid adirondack-topped instruments offering high volume projection with zero distortion, in a tasty curvaceous package. Nice!

Eastman guitars are going from strength to strength and we can’t wait to see what they’ve got up their sleeve. The combination of vintage style and modern construction is a sure-fire winner. If you’re looking for something slightly different but of undeniable quality, be sure to pop into one of our stores and check them out. We find it hard to disagree with what Eastman proclaim; Custom Shop quality for a standard price.