We all have that friend: the one who’s not much of a looker but has a sparkling personality. If you can’t think of which of your friends falls into that category, then I have some bad news for you..

Enter the Gibson Moderne! A truly hideous and misunderstood guitar; a guitar so ugly that even a mother might have to think twice about bestowing their affection upon it.

Before we talk about the Moderne, we shall first set the scene and give a little context to the guitar’s creation. Picture this: it’s 1958, amid America’s space race with Russia the TV is loaded with golden era ‘50s science fiction movies, electric guitars are still very much in their infancy and the most exotic guitar the world had seen was probably a Fender Stratocaster. But pointy, space-age stuff happened to be ‘in’.

This is when Ted Mccarty (we have spoken about him in our Firebird article, go check it out!) had an idea to build three guitars that would capture the ‘50s futurism gripping the zeitgeist. With help from Seth Lover, Mccarty would commission the Flying V, Explorer, and lastly the Moderne. 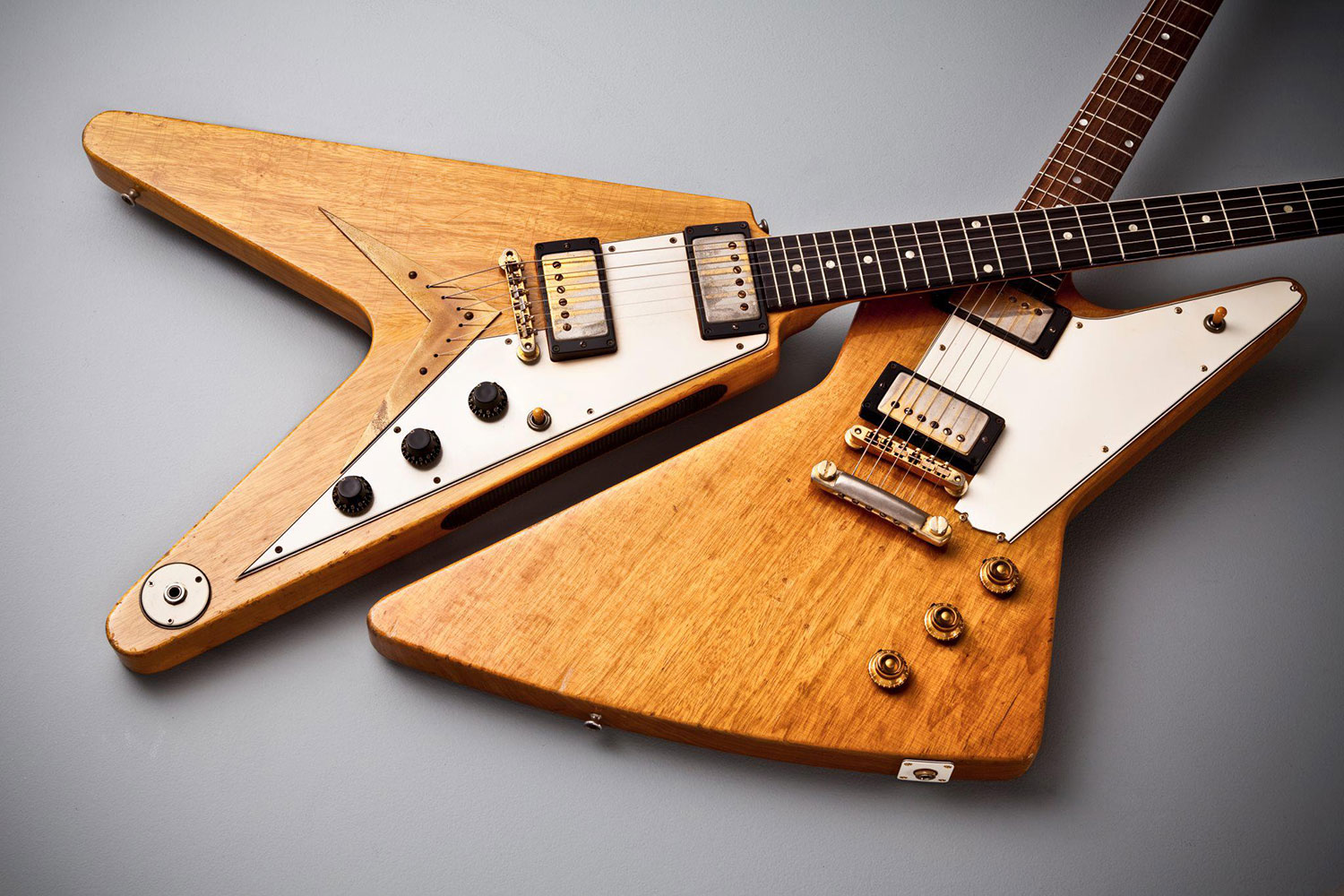 The Korina Trio
As well as being a striking departure from the curvy shapes associated with Gibson at the time, they also differed in construction. All three guitars were made from Korina, a wood with very similar properties to Mahogany, but one that is both lighter in weight and colour and, frankly, an absolutely stunning material when used for a guitar body!

The following part of the story is somewhat lost to the misty haze of time, and Gibson wasn’t exactly great at keeping a record of things back in the late ’50s. However, it has been claimed that Gibson unveiled the Korina trio at the ’58 NAMM show to a modest degree of success with the Flying V, and to a lesser extent the Explorer. The Moderne, however, was roughly about as popular as a fart in a spacesuit, and was surreptitiously removed from the Gibson catalogue.

It’s rumoured that after the dismal NAMM showing all prototypes were destroyed, however a few people have claimed to own one at various points, most notably Billy Gibbons of ZZ Top fame. If true, and there are a few of these guitars out there, then it would make it one of the most collectable guitars of all time, and they should easily fetch more money than an original burst (Gibson Les Paul from ’58 – ’60).

Face for the Radio
So let’s talk a little bit about the specs of this bizarre guitar. As stated above, the guitar was made of Korina instead of Gibson’s usual choice of Mahogany. It featured two of the PAF (patent applied for) pick-ups that were found in the considerably-more-sought-after Les Paul and ES-335 models of the time. It would also don gold hardware and a white pickguard, much like it’s two more popular brothers.

You cannot talk about this guitar without addressing it’s headstock! It looks more like a fish slice with braces than something found on a musical instrument. The designers appear to have ignored the laws of physics, as well as the actual physical requirements of a guitar headstock, and have therefore required the addition of string trees to help create a better break angle to the tuning peg. I’m not really sure it worked…

Lastly, it sported the “Raised” Gibson logo. These were plastic and glued onto the guitar resembling the badge Gibson would later use on their amps, rather than the inlaid mother of pearl logo we’re all used to. 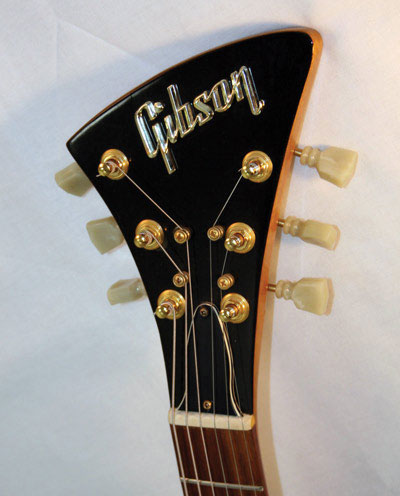 The Moderne Strikes Back
As the world left the 1950s behind, so too did it leave the Moderne. Well, until 1982 that is. Some 24 years after the Moderne was first publicly revealed, the Gibson Custom Shop would reissue the ill-fated guitar, giving the Moderne it’s first official release! These guitars have actually become quite collectable themselves, as the aloof nature of the instrument coupled with the fact that some people didn’t believe it existed, gave it a kind of “living legend” vibe. Gibson would go on to release the Moderne again in a couple of different iterations, including a Zak Wylde signature! 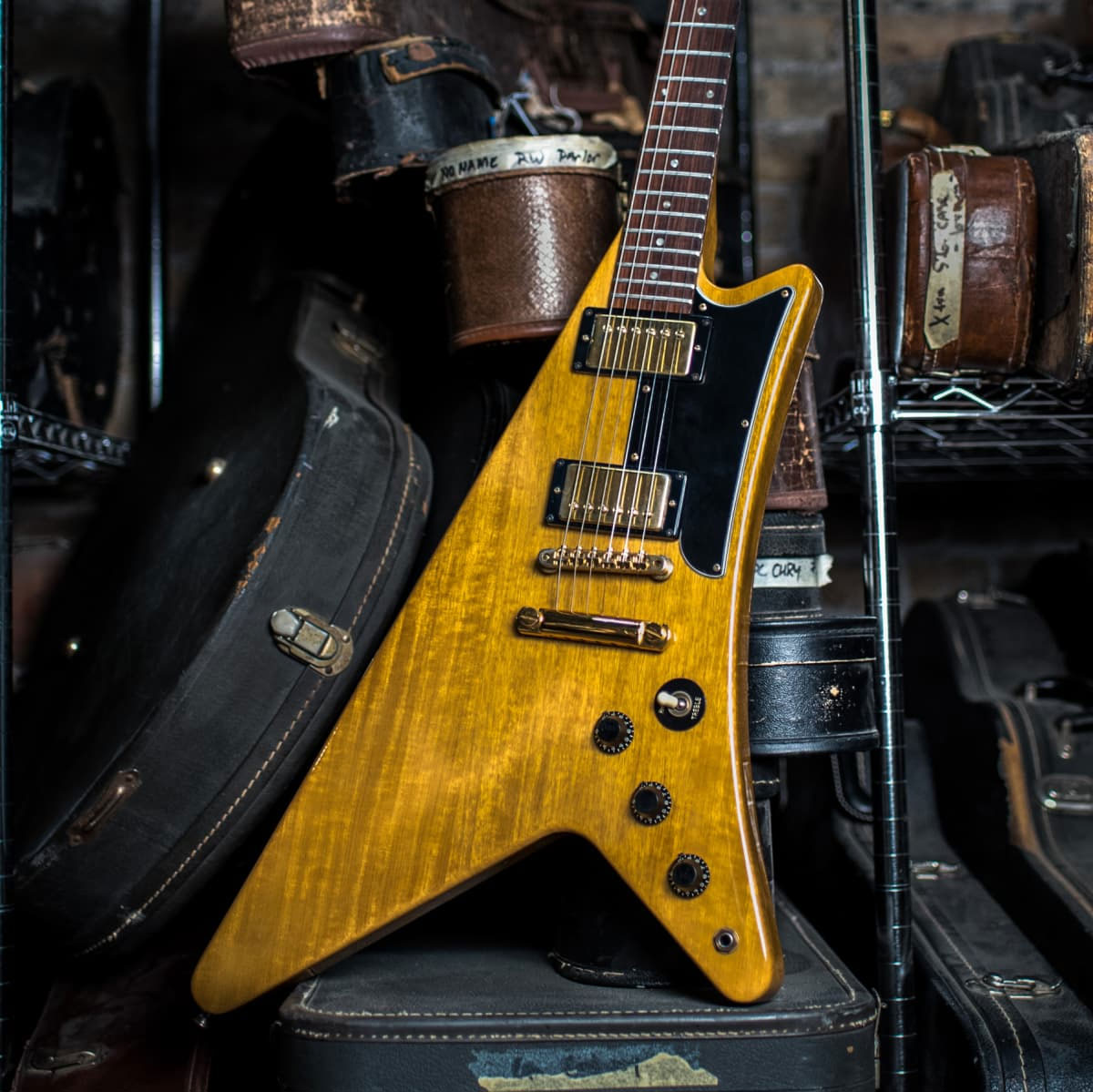 Hopefully, this article has given you a new understanding of this novel footnote in Gibson’s guitar history. Maybe you’ll even go and seek one out! Just remember to keep it in its case. Do not ever look at it. Have you seen Raiders of the Lost Ark?