X
This site uses cookies to provide and improve your shopping experience. If you want to benefit from this improved service, please opt-in.
More Info
Accept Cookies
Kenny's Music Blog Features How to look after a Nitrocellulose finish guitar
Menu
Features, News

How to look after a Nitrocellulose finish guitar

There are three very simple rules when looking after a guitar with a Nitrocellulose finish: don’t get it wet, keep it away from bright light, and don’t feed it after midnight. Sorry, that’s a Mogwai! Well, one of those rules does actually apply. Let’s dig a little deeper into this classic finish.

What is a Nitro Finish?
Nitrocellulose is a century old lacquer used by guitar companies such as Gibson, Fender, Martin and many others. In the ‘50s and ‘60s nitrocellulose lacquer was almost exclusively used to finish guitars, but it is still in use today, well after the “golden era” of guitar building.

So why is it still popular among guitarists in 2020? Is it just a vintage throwback? Does it have any tonal benefits? Let’s have a look…

The Benefits
This is an age old debate, and guitarists will be arguing about whether or not it makes a difference until the end of time. As nitro is a more porous lacquer than its modern counterpart polyurethane, some players believe it allows the guitar to breathe more, therefore aiding in the sustain of the instrument and helping to create a fuller, richer sound.

Arguably, a more obvious difference between nitro and poly is the way it feels to play. Nitro has a more organic texture under the hands, and feels less like a coat of plastic. It also naturally wears down on the most played spots, leaving your guitar with that vintage “played-in” feel.

Also, in my personal opinion, nitrocellulose finishes tend to look a lot nicer! They are usually buffed up to a far greater shine compared to other finishes and they can really show off the wood grain underneath, especially on a flame top Les Paul.

So, we’ve talked about the positives of a nitro finish guitar, but as with all things there’s a trade off. Let’s discuss the not so positive things to keep in mind when owning one of these beautiful instruments!

Keep it out of direct sunlight
Much like the Mogwai, direct sunlight is fatal to a nitro finish. Ok, I’m exaggerating, but all you need to do is look up pictures of old “white” Les Paul customs to see the damage this can do to the finish over time. 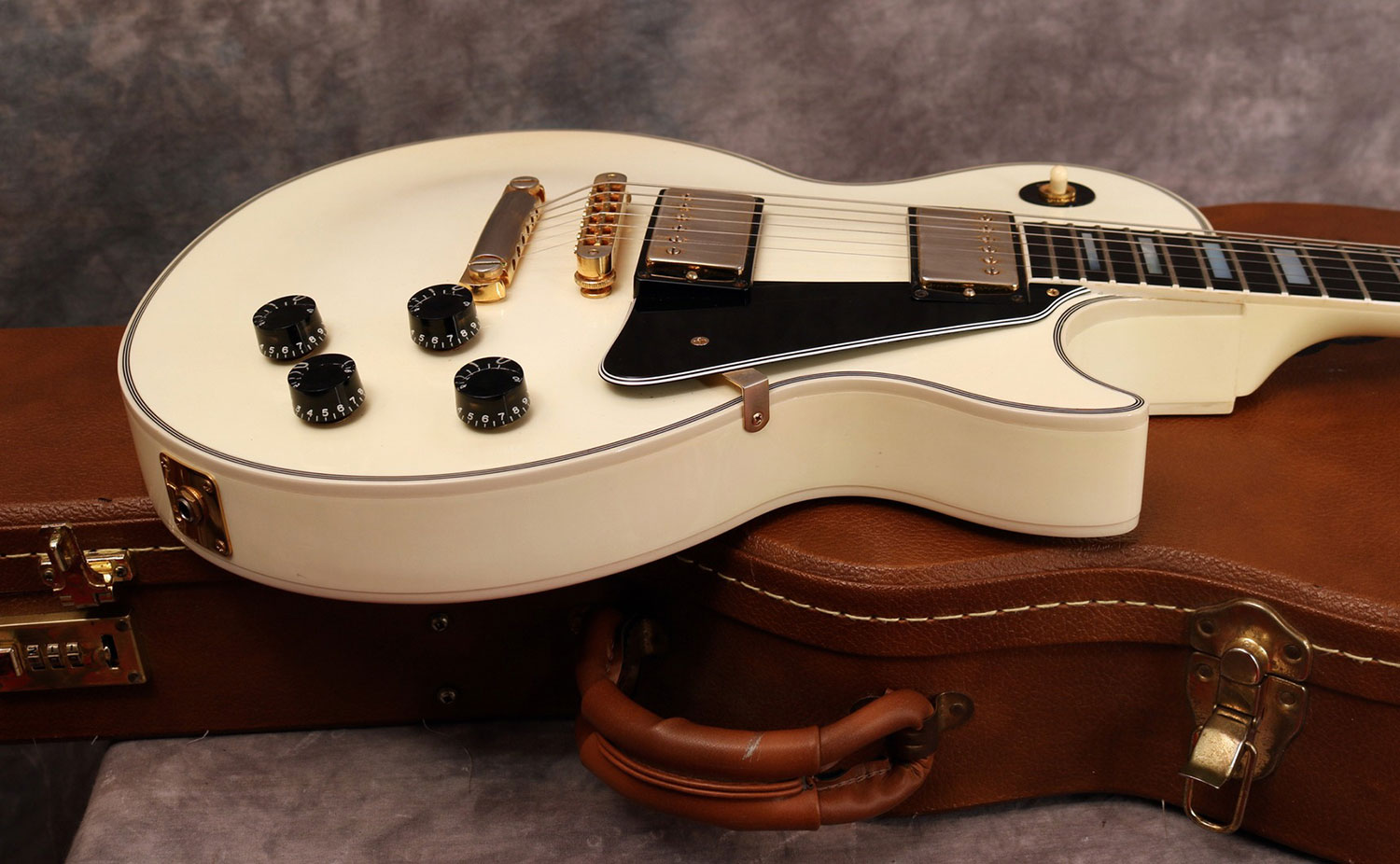 I could’ve sworn this was white when I bought it! Credit: vintageandrare.com

This can look pretty nice, especially if you’re after an off-white-yellow-ish finish, but if you want to keep your guitar looking as fresh as it did the day you got it, treat it like a vampire and avoid the light!

Regulate The Temperature
Finish “checking” is common to see on nitro guitars. This is where tiny cracks appear in the finish, caused by extreme temperature changes that cause the wood to expand and contract. Because the lacquer doesn’t expand and contract at the same rate, it can’t keep up with the wood and the result is small cracks in the finish.

Metallic finishes tend to be more prone to this, which is why you see so many Gold Top guitars with check lines all over the body. I must admit I think it looks pretty cool, but it will affect the value of the instrument so it’s best to avoid it if possible! 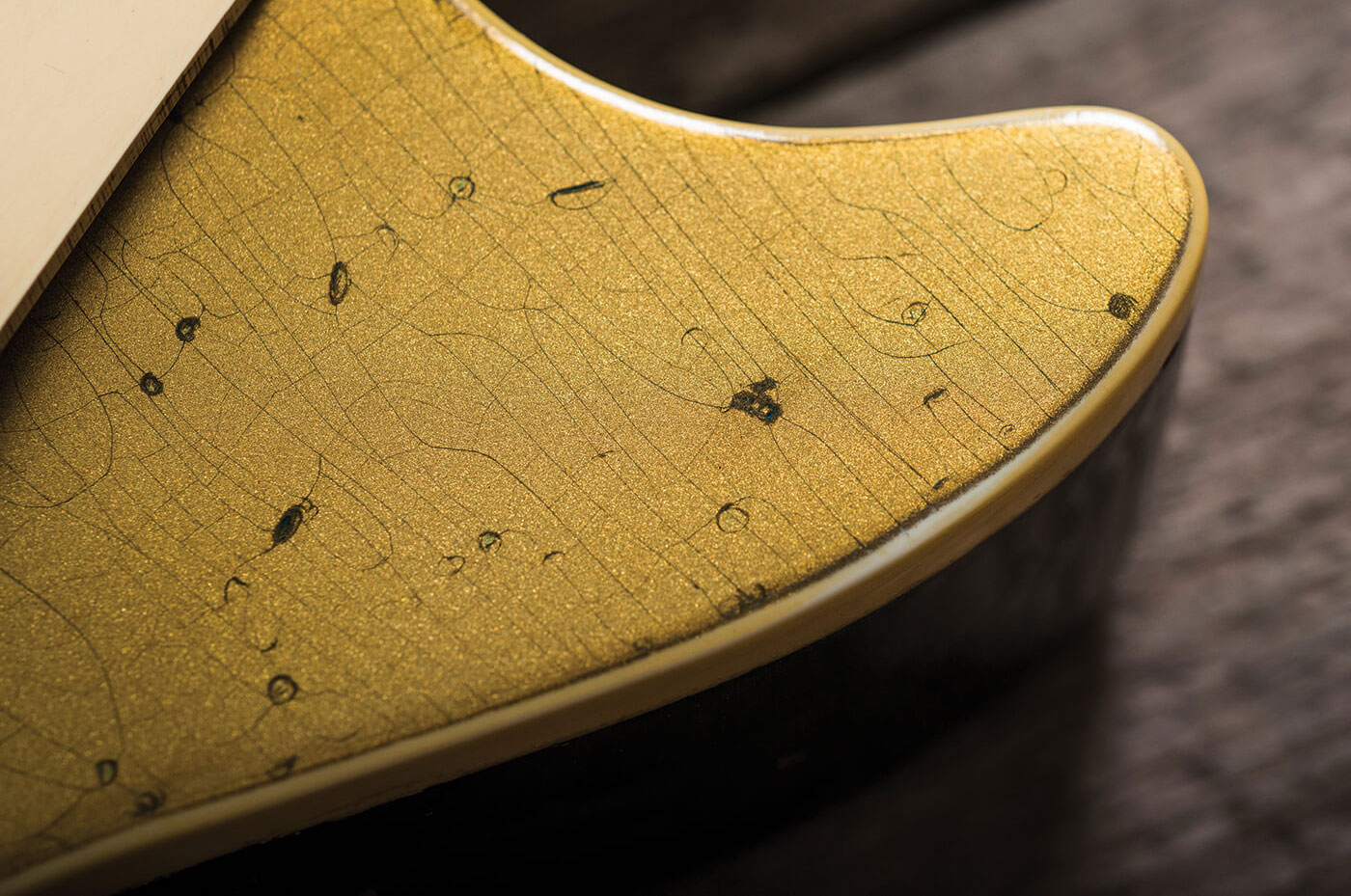 Daryl’s Top Tip™ – If your guitar has been sat in a cold environment (e.g. sitting in the boot of your car before entering a warm venue), keep it in the case and allow some time for it to adjust to the new warmer temperature. Don’t open the case straight away!

Avoid rubber stands!
This is a big one, and you’d be surprised how many guitarists don’t realise this, but nitrocellulose can react with rubber and foam. Most commonly referred to as “Nitro burn” or “stand rash”, this is where the finish has had a chemical reaction with the stand it’s been resting on, causing the lacquer to melt. The results can leave the finish uneven and in some cases looking a little unsightly. You can imagine if this happens on the back of your neck, it can make playing the guitar a little uncomfortable.

We recommend using Hercules stands, as these are designed to be nitro-safe (and I’ve never had an issue resting one of my nitro-finished guitars on one of these!)

In summary, owning a guitar with a nitrocellulose finish can be a little more work than a guitar with a polyurethane finish, but I really do think the benefits outweigh the negatives. To me they sound better, feel better and look better! If you follow the easy steps I’ve listed above, you should avoid any finish disasters and have a stunning guitar for many years to come.

P.S. – Really don’t get it wet or feed it after midnight… It’s a guitar!