X
This site uses cookies to provide and improve your shopping experience. If you want to benefit from this improved service, please opt-in.
More Info
Accept Cookies
Kenny's Music Blog News The 8 Most Expensive Guitars Of All Time
Menu
News

The 8 Most Expensive Guitars Of All Time

What with a certain Pink Floyd guitarist having recently auctioned off his whole collection of guitars in aid of a climate change charity (you can drool over them in glorious 3D here), we thought it was time to update the list of the most expensive guitars ever sold… 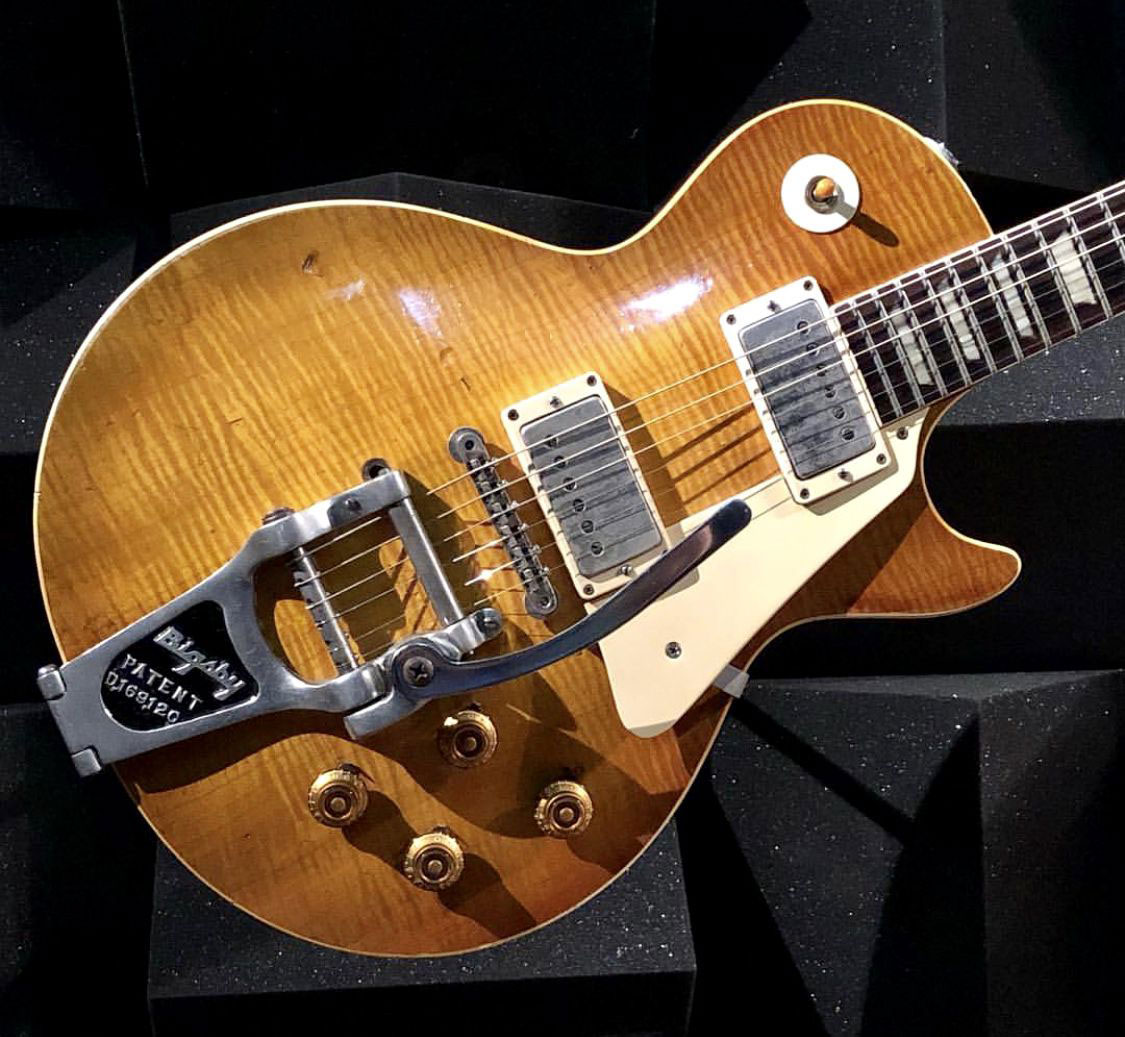 Featuring a Bigsby and played by Keef on such Stones classics as Satisfaction and Get Off My Cloud, this is a pretty tasty little slice of rock n’ roll history, no doubt reeking as it does of fags and whisky. It also doesn’t hurt that it was played on the Stones’ first US TV appearance and loaned out to both Jimmy Page and Eric Clapton. 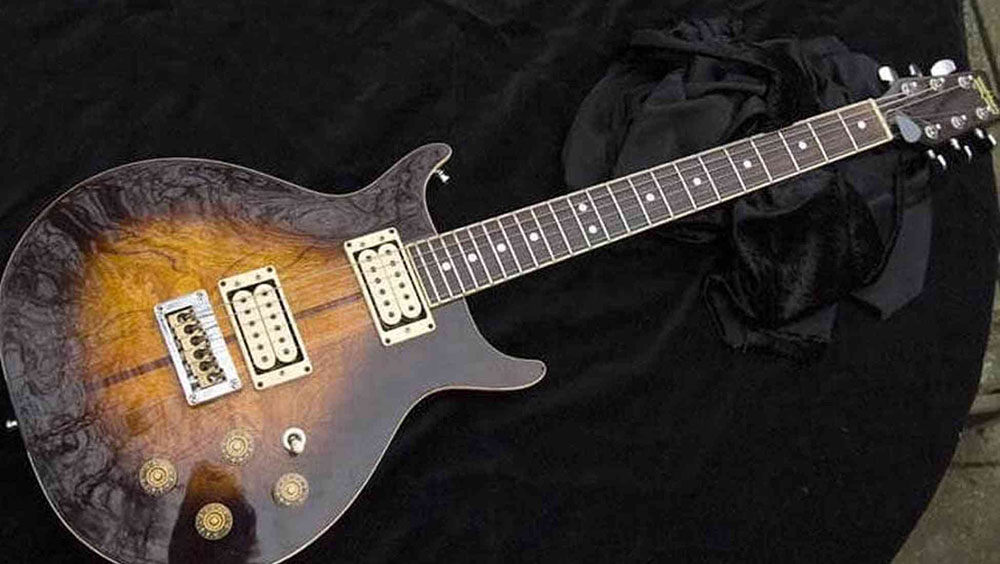 Bob Marley only owned seven guitars meaning the ones that are left are worth that much more, especially as the Jamaican government designate them “national assets” and spend loads of money on them. Bob gave this Washburn to his guitar tech Gary Carlsen, who went on to sell it to the government for a huge amount of money and donate the proceeds to charity. One love. 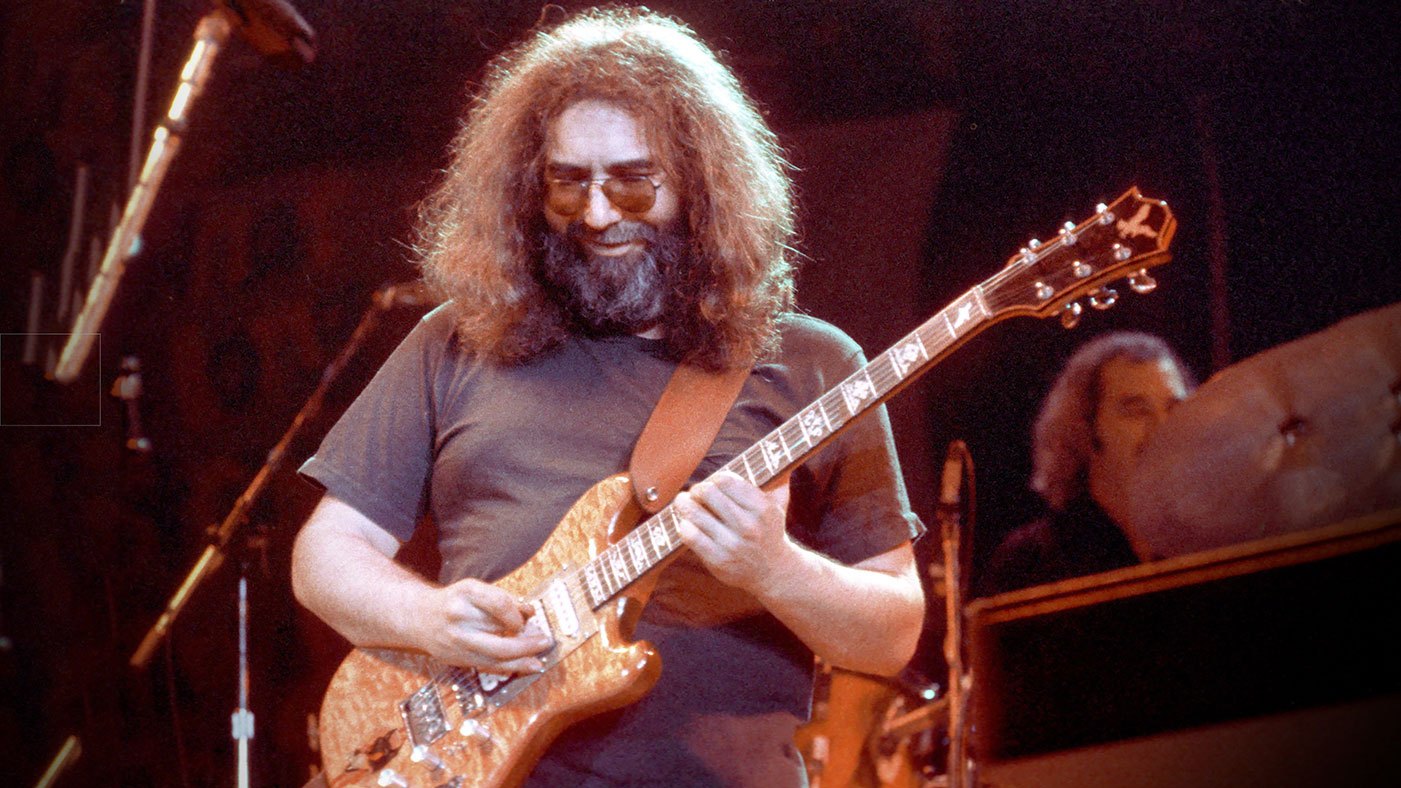 The Grateful Dead aren’t actually all that popular in the UK, so this one’s a bit of surprise, but once you consider that 75% of American college kids who grow up to be billionaire CEOs of massive tech companies were once pot-smoking Deadheads, it all makes sense (note: I made up that number). Also, unlike Jimi’s Strat, it’s a complete one-off as it was custom built for Jerry by music store owner Doug Irwin in 1973.

This guitar pretty much has history oozing out of its jack socket: played by Jimi at Woodstock, it is an absolute icon. However, if you like actually playing guitars rather than storing them in a temperature-controlled safe for years before selling them at a huge profit, it’s not actually that great; a stock right-handed CBS-era Strat in Olympic White, albeit flipped around to be played left-handed. But… Jimi.

Purchased by Metallica’s Kirk Hammett, this guitar has a dual heritage: it was owned by both Peter Green of Fleetwood Mac and Gary Moore. Not only that, but it’s something of a custom guitar: one of the pickups has been turned round, meaning that – though it’s a Les Paul – it can produce a Strat-style out of phase tone. If it’s worth $2m now, think what it’ll be worth when that little scamp Hammett finally sells it… 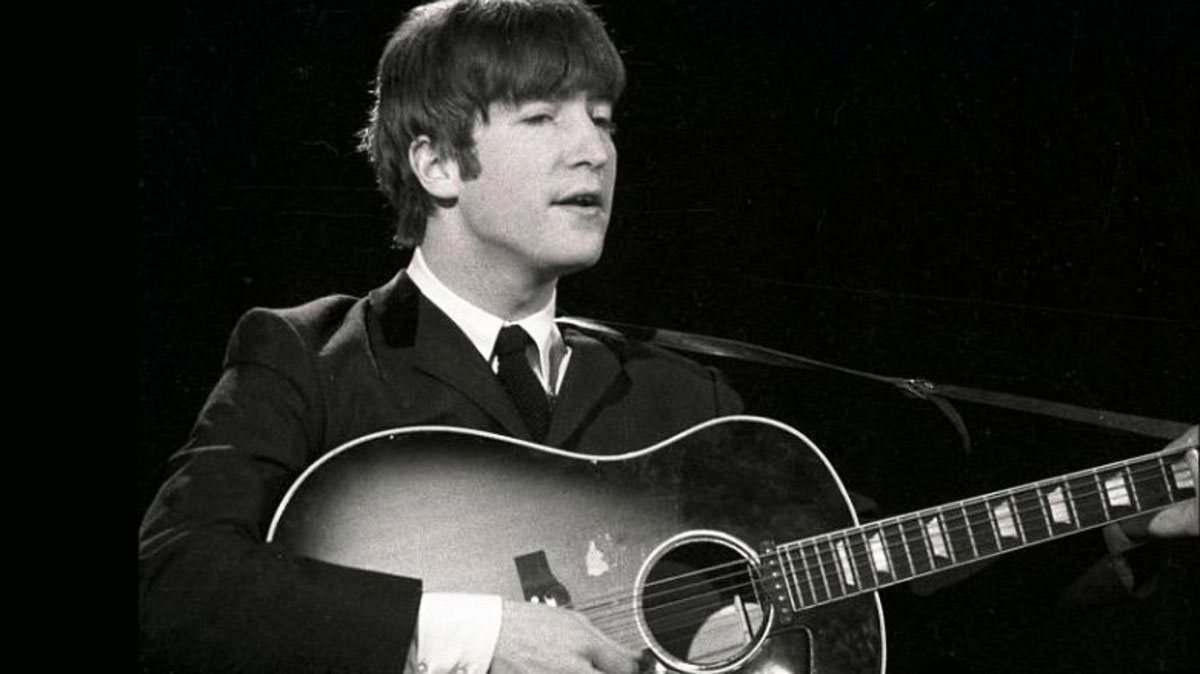 Purchased by Brian Epstein in 1962, this guitar was used on Beatles’ classics “I Want to Hold Your Hand” and “She Loves You” amongst others. However, it’s life in John’s hands was fairly short-lived; it was lost by a roadie at a London concert in 1963. It then found itself travelling incognito around the world for a few years before being sold in 1969 for $175 to a humble hobbyist (who had no idea whose it was) and kept in his front room for another 45 years before he recognised its similarity to one that George Harrison played (and that had been bought by Epstein at the same time). The rest is extremely lucrative history. 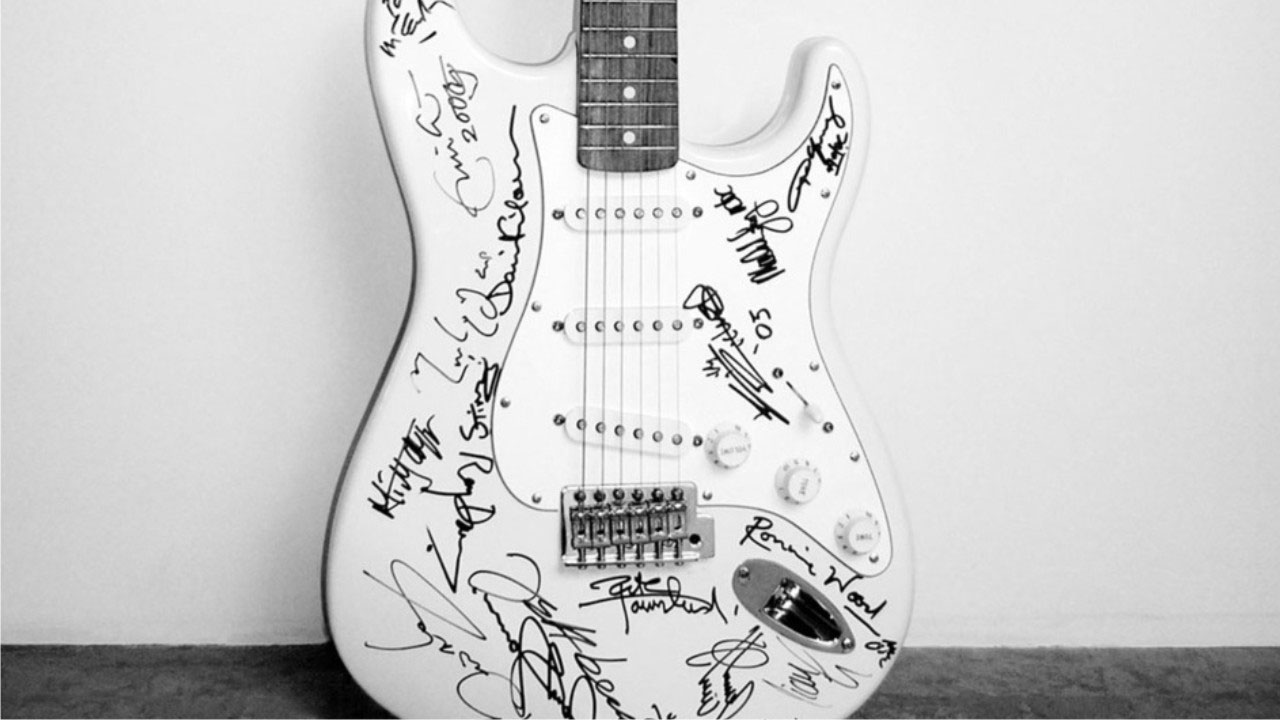 This guitar was sold in 2005 to benefit victims of the Asian tsunami that occurred in December the previous year. The thing is, there’s actually nothing particularly special about the guitar itself. Oh, other than the fact that it was signed by Eric Clapton, Mick Jagger, Brian May, Jimmy Page, David Gilmour, Jeff Beck, Pete Townsend, Ray Davis, Liam Gallagher, Ronnie Wood, Tony Iommi, Angus Young, Malcolm Young, Paul McCartney, Sting, Ritchie Blackmore, Def Leppard, and Bryan Adams. Not a bad little line-up there, though we have a feeling any band including all of these mega-egos may suffer from a few too many arguments on the tour bus. 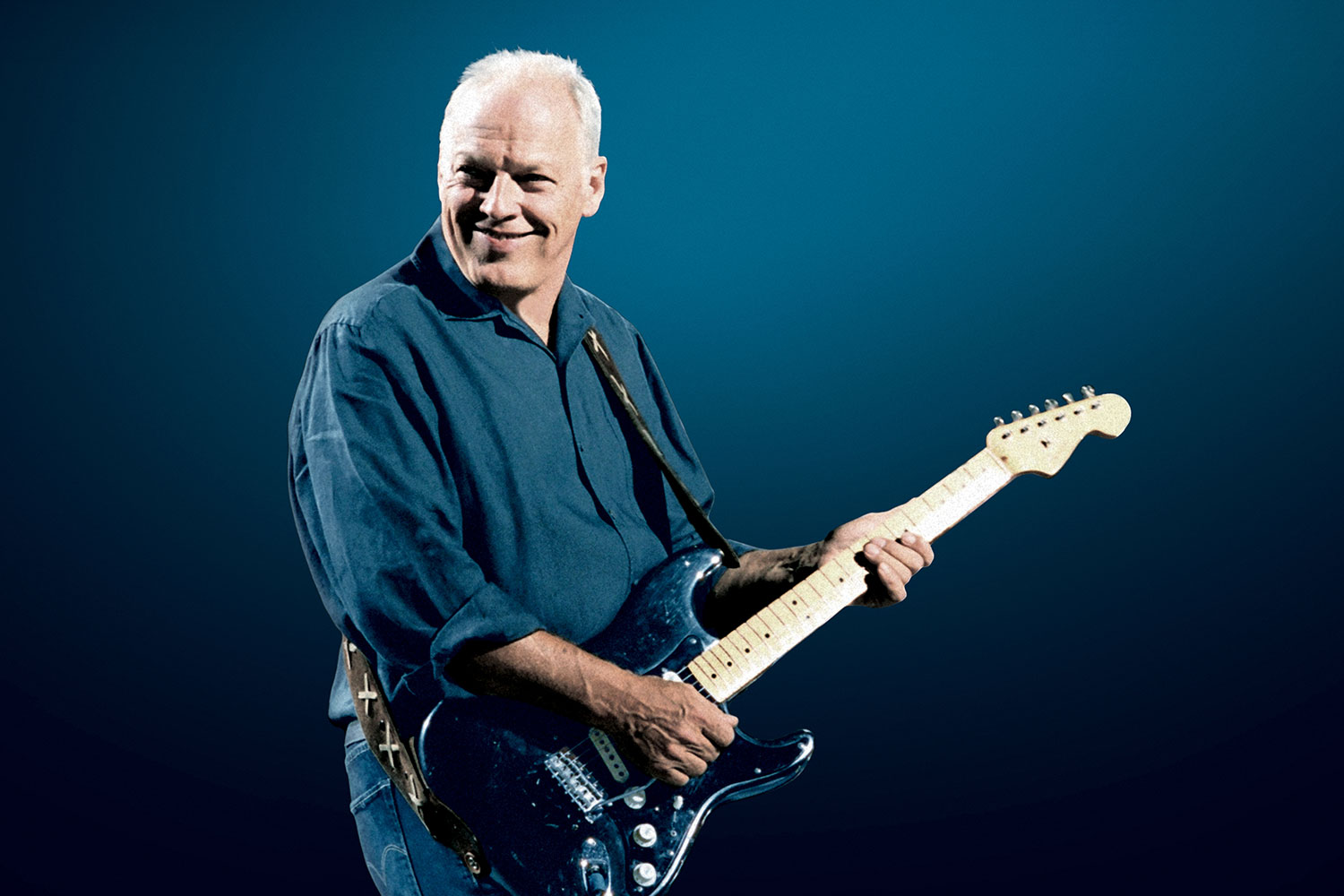 Weird fact: this Strat was originally sunburst but was painted black by a music store employee in the States. Why? We don’t know. All we do know is that if Kenny caught us painting the sunburst guitars in the shop different colours, our music retail career might well be over. Also, it seems that most of the components of this guitar have been changed over time, with only the pickup selector switch being part of the original guitar purchased, so it’s not actually the guitar that David Gimour originally bought. But who cares? It’s a snip at just under $4m.