X
This site uses cookies to provide and improve your shopping experience. If you want to benefit from this improved service, please opt-in.
More Info
Accept Cookies
Kenny's Music Blog News The Best Guitar Amps For Home Use
Menu
News

The Best Guitar Amps For Home Use

Although we’d all love to be rocking Wembley Stadium with a huge, definitely non-Health & Safety compliant stack of Marshall cabs behind us, let’s face it: most of the playing gets done at home. This in mind, below is a little round-up of the best amps for the living room (and no, that doesn’t sound very rock n roll). We’ve even included the weights and dimensions of each amp so you can decide which one will fit best between your ottoman and your antique humidor, just because we love you (and we want to help you buy things, because that’s our job). Here goes:

It’s sort of incredible that, despite their undeniable place in guitar gear history, the first amps branded Boss were only released in the last 10 years. The fact is, there kind of were Boss amps before this: Roland make Boss pedals, and Roland’s Cube amps have been around for years. They just didn’t think to put the iconic Boss badge on them. Until now… (well, recently anyway)

The Katana series were an immediate hit on release. They offer exceptional tone that belies the fact that they’re solid state, and they feature all the effects nous that has made Boss a staple of pedal boards across the world for many years.

The Katana 50 features 5 amp characters: Clean, Crunch, Lead, Brown, and Acoustic. These offer you a huge pallet of tones to play everything from searing leads to crunchy grunge distortion to sparkling acoustic clarity.

Alongside this are the aforementioned effects, 58 of ‘em to be precise (when downloaded via the USB connection). These are of exactly the quality you’d expect from Boss, with phasers, delays, overdrives, reverbs and everything else you can imagine to work with. The effects can be controlled via the amp itself or with the optional GAFC foot controller, which effectively makes your pedalboard redundant. Nice. (Well, not for your pedalboard, who will be sad, but that’ll teach it for being so damned fiddly.)

What’s more, all of these settings can easily be saved as what Boss call “Tone Settings”. These are basically memories for up to 4 different complete setups for the amp, meaning you can quickly jump from blistering thrash to noodly jazz in a matter of milliseconds (if that’s something anyone would ever actually want to do). 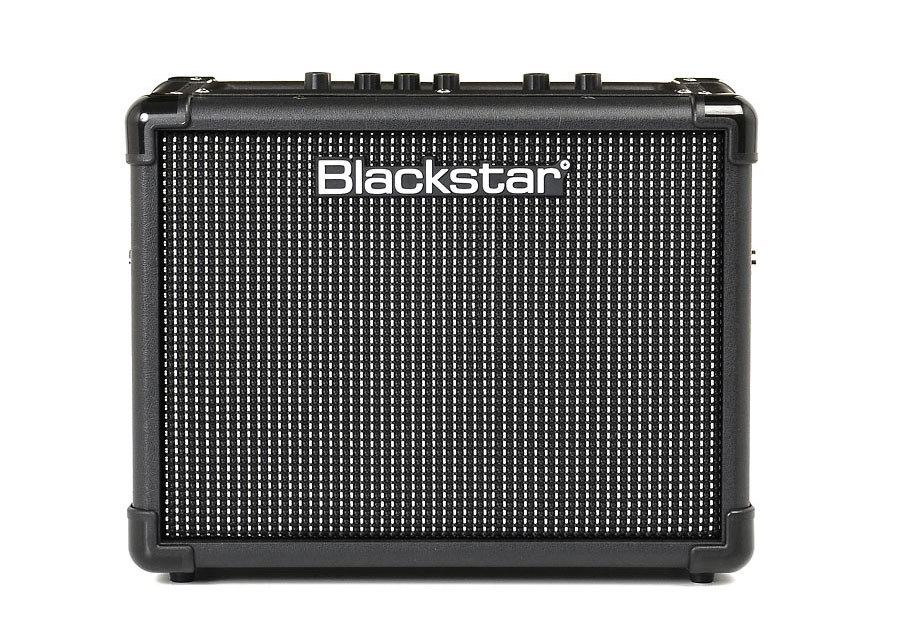 It’s amazing to think that Blackstar Amplification was only founded in 2007. Since then they have established themselves as a heavyweight brand in a world of very heavyweight brands. No wonder: they make great amps. The Blackstar ID:Core v2 series is what we’ll focus on, as these bad boys are expressly designed for home use, and that’s why you’re here. Specifically, we’ll look at the snappily-named ID:Core Stereo 10 v2

The ID:Core Stereo 10 features 6 voices: Clean Warm, Clean Bright, Crunch, Super Crunch, OD 1, and OD 2 (OD stands for Overdrive, fact fans). These sound great and when paired with Blackstar’s secret special dial – the ISF control (which changes the tonal character of any of the amp models) – they sound even greater. It also features a decent sounding effects section with 13 effects, though this is not as full-featured as on the Katana, presumably because Blackstar haven’t been making effects pedals for a million years like Boss have.

One major feature of this amp is the USB connection. This not only allows you to deep edit your guitar sounds, but also sends audio to a computer for recording. They’ve even included Presonus audio recording software in the bundle; what a very generous upstart heavyweight brand they are.

It’s also worth noting that the ID:Core v2 10 features two speakers to offer a “Super Wide” stereo sound, which gives a lot more depth to certain effects and ultimately makes playing with the amp a lot of fun. We only wish they’d called it “Wide-O Mode” to appeal to certain of the Glaswegian contingent. 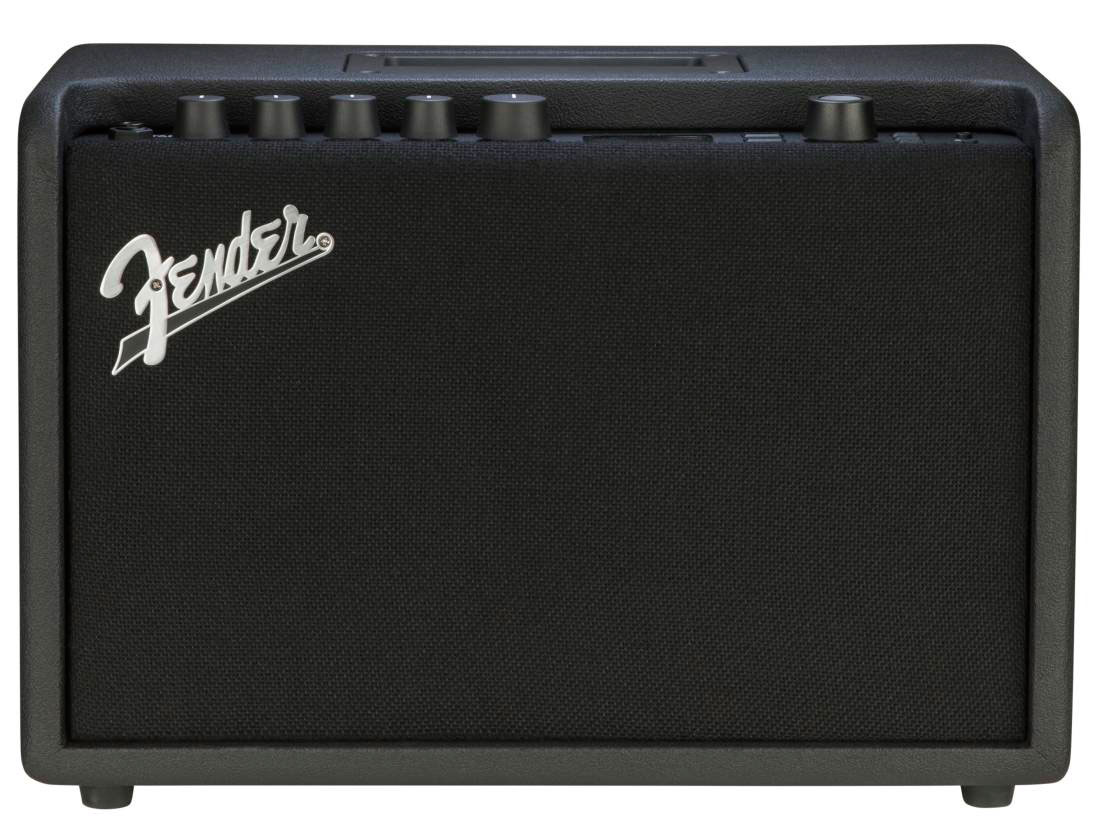 You may not have heard of Fender; they’re a tiny boutique amp manufacture developing weird hand-wired boxes out of a garden shed in Paisley. No, wait, that’s not right; they’re a globe-straddling monster corporation who have made some of the most iconic products in the history of the known universe used by everyone from Bob down your local pub to Zargon The Destroyer Of Worlds from the Horsehead Nebula.

The Mustang GT40 features 21 different amp models, enough to play an impossibly eclectic 18 hour progressive fusion jazz rock opus to your cat. It also has 47 effects (I realise that very specific numbers like 47 are not particularly helpful when deciding what amp to buy, but I like numbers, and at least they give you an idea of the scope). These effects include all the usual delays, reverbs, modulations etc. so you can emulate your heroes or mess up your sound to your heart’s content.

The GT40 even has a built in looper, ideal for jamming with yourself at home (though this is only unlocked with the optional MGT-4-4 footswitch). Aaaand it streams audio over Bluetooth so you can use it as a hifi.

The niftiest feature of the GT40, though, has got to be the onboard WiFi. No: this isn’t for checking your emails or browsing questionable websites. It means that you can easily upgrade the features of the amp without messing around with USB cables and computers, and that you can control the amp from your device and download new sounds and presets from the slightly sinister-sounding Fender Tone Cloud. Zargon will be delighted. 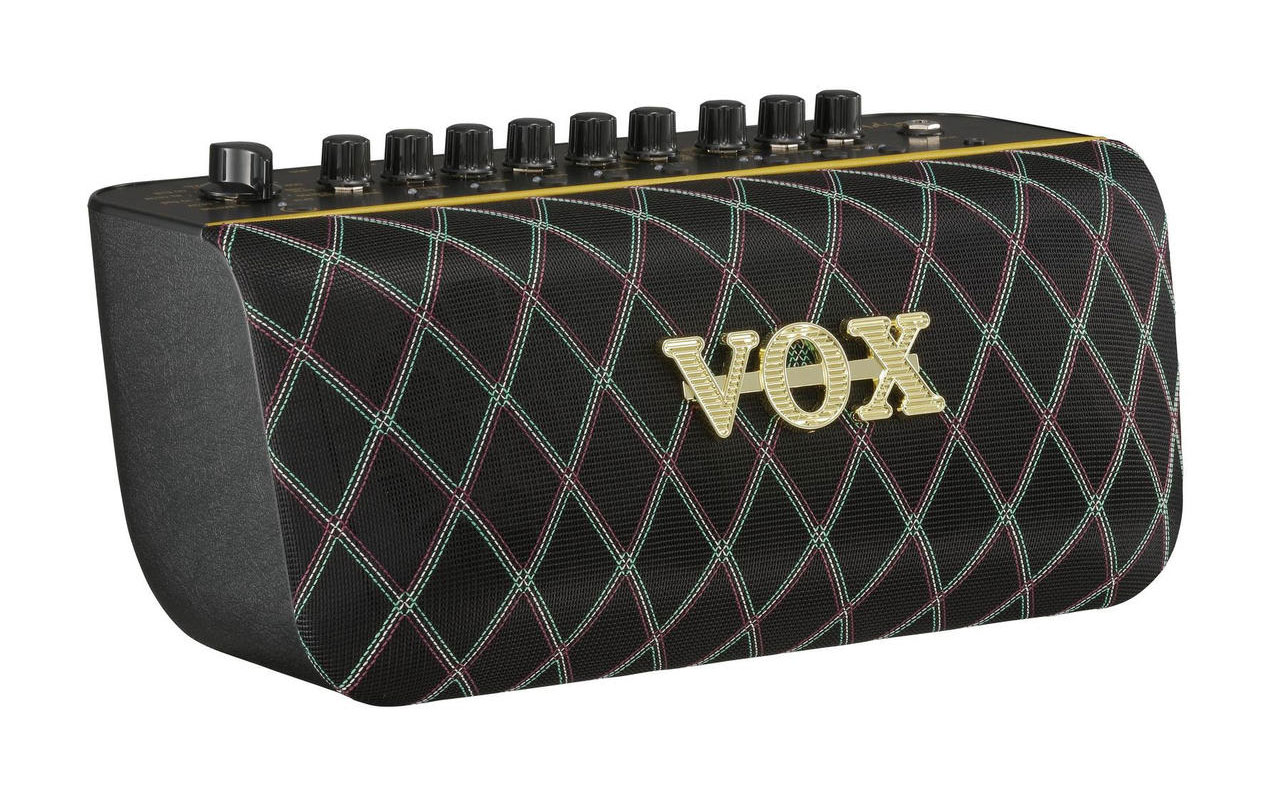 The smallest and lightest of the amps we’re looking at here, the VOX Adio Air GT is a stylish little number, resembling as it does an extremely expensive Italian handbag. This is no bad thing, though; the Italians are known for the quality of their handbags. What’s surprising, considering its compact and bijou nature, is that it packs 50 watts of output into that sexy little box. This isn’t going to impress the fans at Wembley, but it will certainly scare your cat out of the room.

The Adio Air GT has been expressly designed to perform not just as a guitar amp, but also as a home hifi system, featuring special VOX magic to make it sound more stereo than it actually is. Combine this with the fact that it can be powered by 8 AA batteries, and you have not just an amp for the home, but one that can be taken to the corner shop to serenade the locals.

It doesn’t skimp when it comes to tonal versatility either: proprietary technology (don’t they all have proprietary technology?) means that the 23 amp models and 19 effects types sound amazing. These can be edited via Bluetooth or over USB, so you can tinker away until you’ve managed to create that elusive patch that somehow combines the sound of Kurt Cobain’s grunge with Django Reinhardt’s gypsy jazz. Anything’s possible.

Conclusion
Wait… this isn’t an essay, why do I need a conclusion? It’s maybe at this point that I’m meant to summarise the similarities and differences between the amps I’ve been discussing, but frankly I’ve already done that, so I’m not sure it’s necessary. Technology has reached a stage whereby pretty much everything that is released by major brands is as close to magic as is possible without a trip to Platform 9 and ¾ and several years’ wizard training. All of these products are great; that’s why we stock them. There is no point in choosing one to be “the best”. It depends on the specific requirements of your home, your ears, and your cat. If you’re really not sure, drop by one of the stores and give them a go. We’ll put the kettle on.