The Golden Age Of Gibson

“Golden Age Gibson”. It’s a term that gets bandied about a fair bit in nerdier guitar circles (I would mock, but these are my people), but maybe isn’t really explained. In simple terms, The Golden Age of Gibson refers to the period between 1950 and 1965 when Ted McCarty was president of the company (these dates are a ballpark, and vary depending on which guitar nerd you are conversing with). So you have the when, but that doesn’t really give you any scope of the why. Rather than giving you a completely exhaustive list of every guitar and innovation Gibson released in a 15 year period – and it would be an exhaustive list – let’s look at some of the highlights.

So if you’re not familiar with this model, this may not be the blog post for you. The Les Paul was first released in 1952. It was designed by Ted McCarty, factory manager John Huis and endorsed by Les Paul… hence the name. 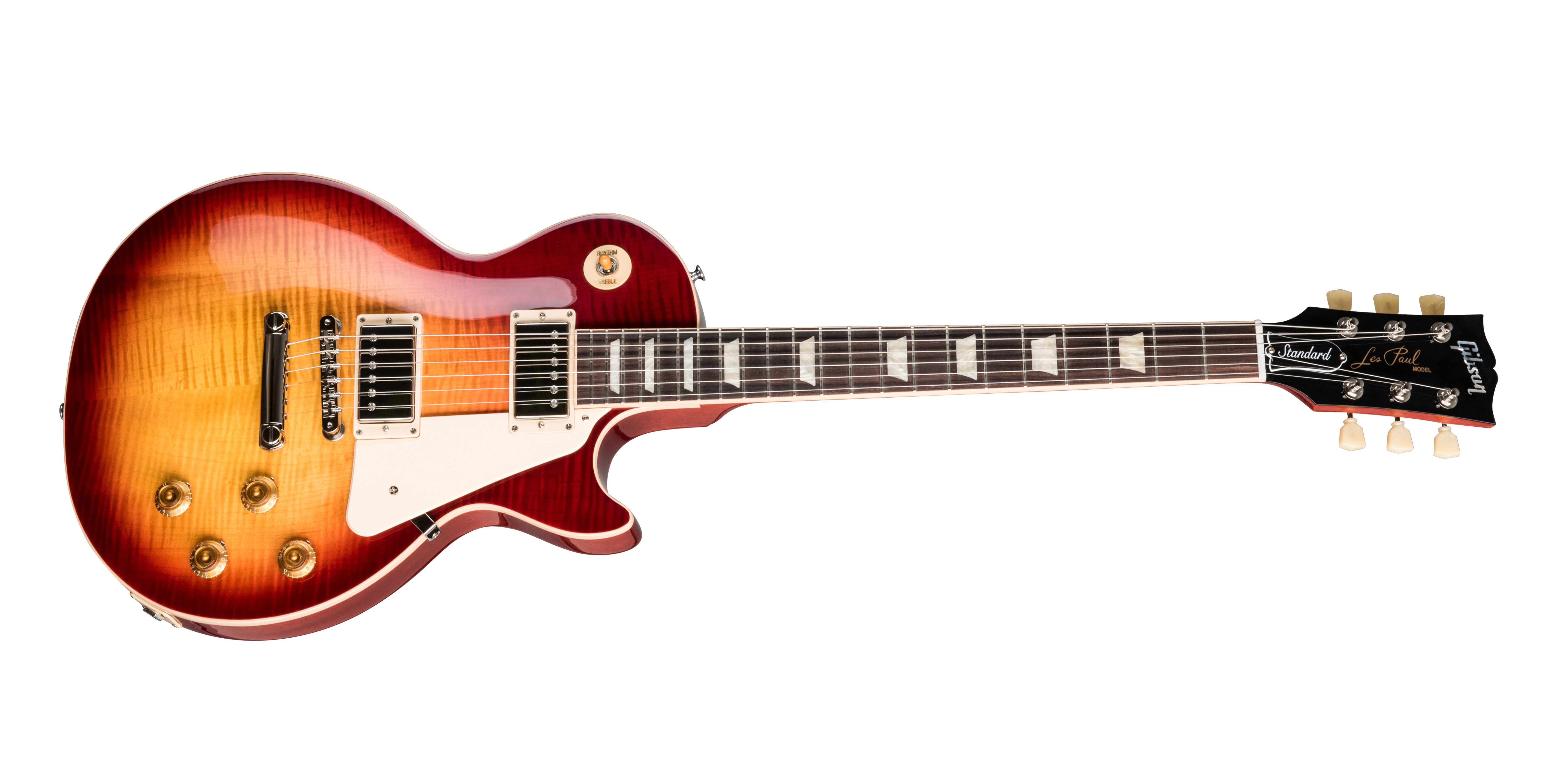 This guitar has had thousands of iterations, finishes, discontinuations and relaunches over the years. It’s also one of the most copied body shapes in guitar history, and Gibson have the lawsuits to prove it. It was even privy to innovations within the innovation. In 1957 it was the first Gibson guitar to feature humbuckers and the Tune-O-Matic bridge, then in 1958, Gibson’s first Sunburst finish was introduced. It’s even got subcategories, which you can read more about here, some of which are Golden Age Gibson’s in their own right.

The Gibson ES-335 (Electric Spanish in case you were wondering) is far from the first in the ES range, but it’s definitely the most popular. Introduced in 1958, these are semi-hollow electric guitars, with a solid centre block, hollow “wings” featuring “F” holes and a double cutaway at the neck. 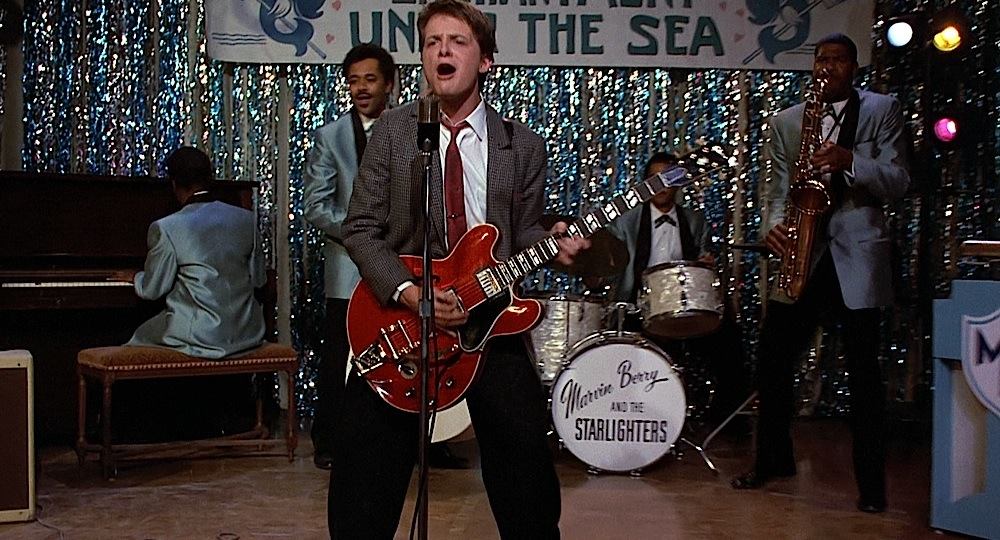 These guitars have been wielded by artists from Chuck Berry to Dave Grohl, and most notably Michael J. Fox in “Back To The Future”. Alright, technically this was an ES-345, but as the film was set in 1955 and both these models came out in 58’, the guitar was an anomaly and I wanted a way of crowbarring it into this post.

Love it or hate it, there’s no denying that the Flying V is iconic. Originally released in 1958 as part of the same series as the Explorer and Moderne (read more on the Moderne here, at your own peril), the Flying V was part of a “futurism” kick that never really… took off (sorry). 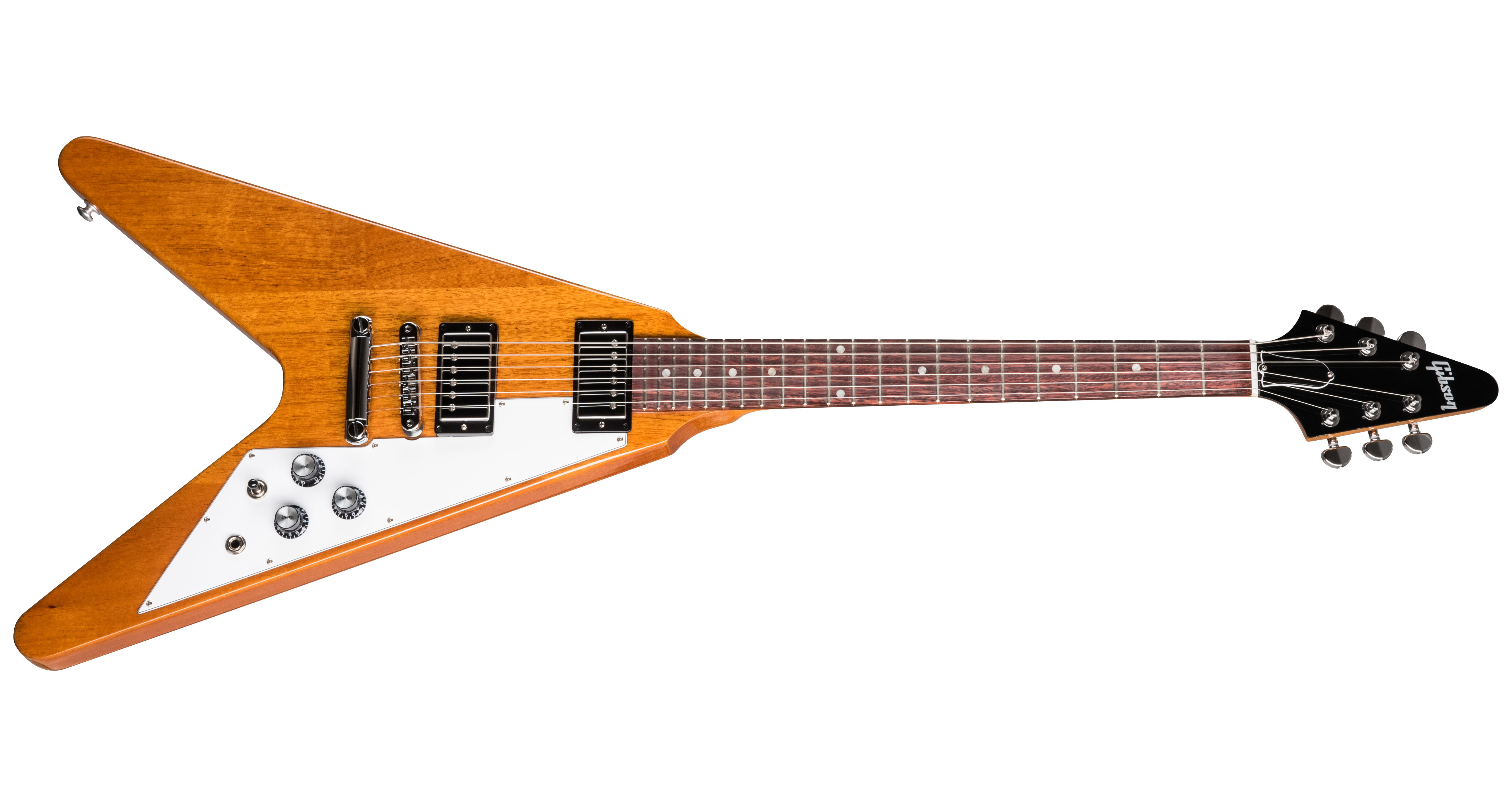 The original concept was that the player would position their right arm between the “legs” of the “V” to strum. Fortunately, this ridiculous premise never caught on, and people continued to play the guitar like sane, rational human beings. The “V” was actually pretty unpopular when first released, and Gibson discontinued it just a year after it launched, before bringing it back in 1967. It has been in production ever since, and whilst it might not be a “go-to” Gibson, it definitely found its niche. Anyone heard of Jimi Hendrix?

Again, if you don’t know this one I’m not sure how you’ve ended up on this page. Do you not know how to internet? The SG was originally designed as a Les Paul in 1961, in an attempt to bolster dwindling Les Paul sales in the early 1960’s. There was just one problem. Les Paul. He hated the new guitar. Gibson had done the redesign without his knowledge and he wasn’t happy with his name being attached to what he considered an inferior product. 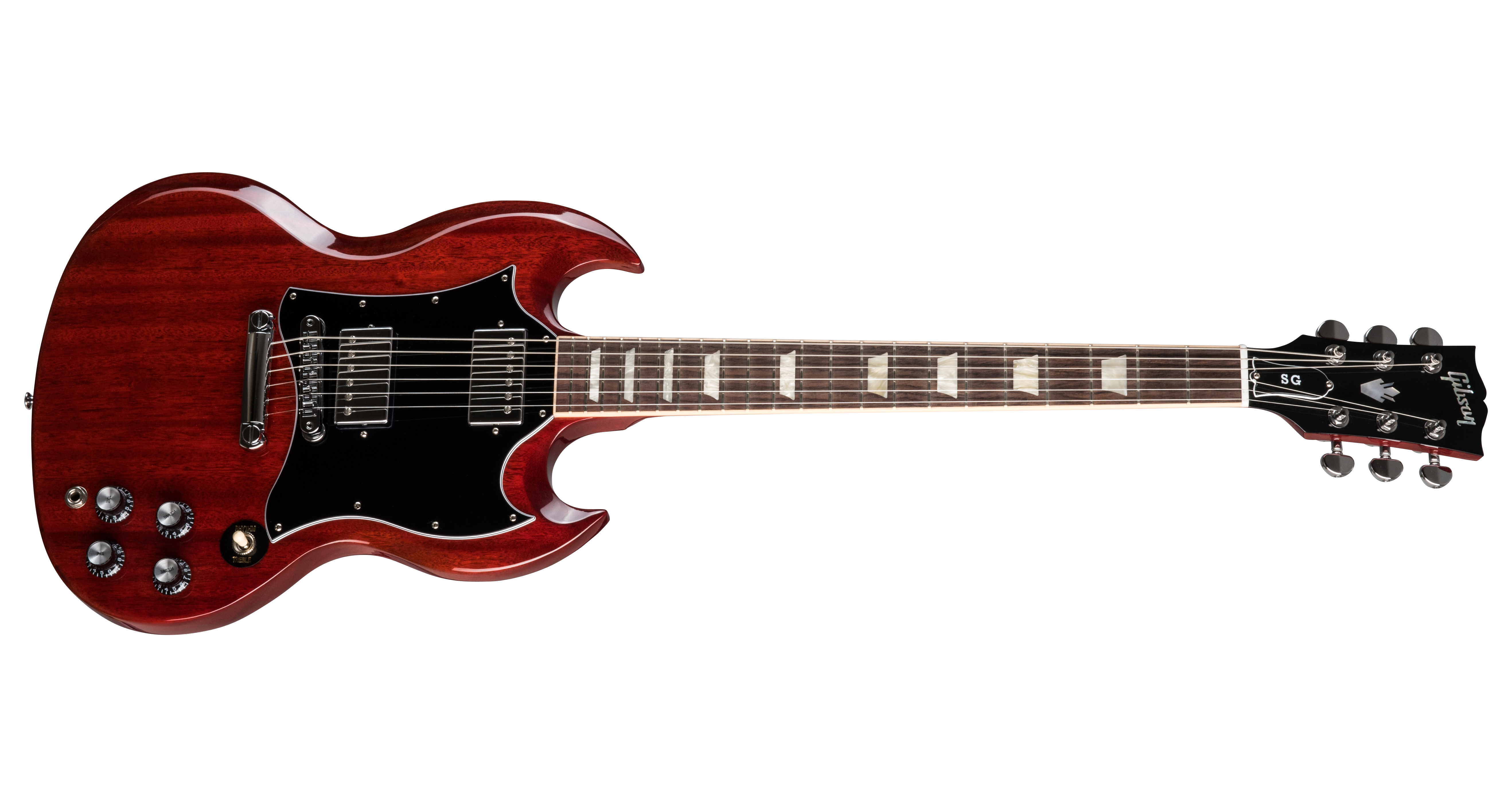 In 1963, it was rebranded as the Gibson SG (Solid guitar. I’ll bet that was a lengthy marketing meeting) and the rest is history. Pretty spectacular history in fact, when you consider the SG Standard is Gibson’s best selling electric guitar model ever.

The Firebird is an odd guitar. I feel like that just about covers it to be honest, but I’ll explain. It was released in 1963, and is worthy of a mention for a couple of interesting reasons. First of all, it was designed by a car designer, and is said to be modelled after the tailfins of popular 1950’s American cars. It’s also backwards. If you consider pretty much every other electric guitar of the time, the “horn” is on the bass side of the guitar. This means the Firebird is essentially an offset (guitar speak for squinty) instrument but in reverse. Hence the “Reverse” and “Non-Reverse” versions of the guitar which followed.
It’s also the first Gibson guitar to feature neck-through construction. This means the whole neck and centre of the guitar are composed of solid, continuous pieces of wood running the whole length of the instrument, as opposed to the bolted or glued on necks generally used by Fender and Gibson respectively. 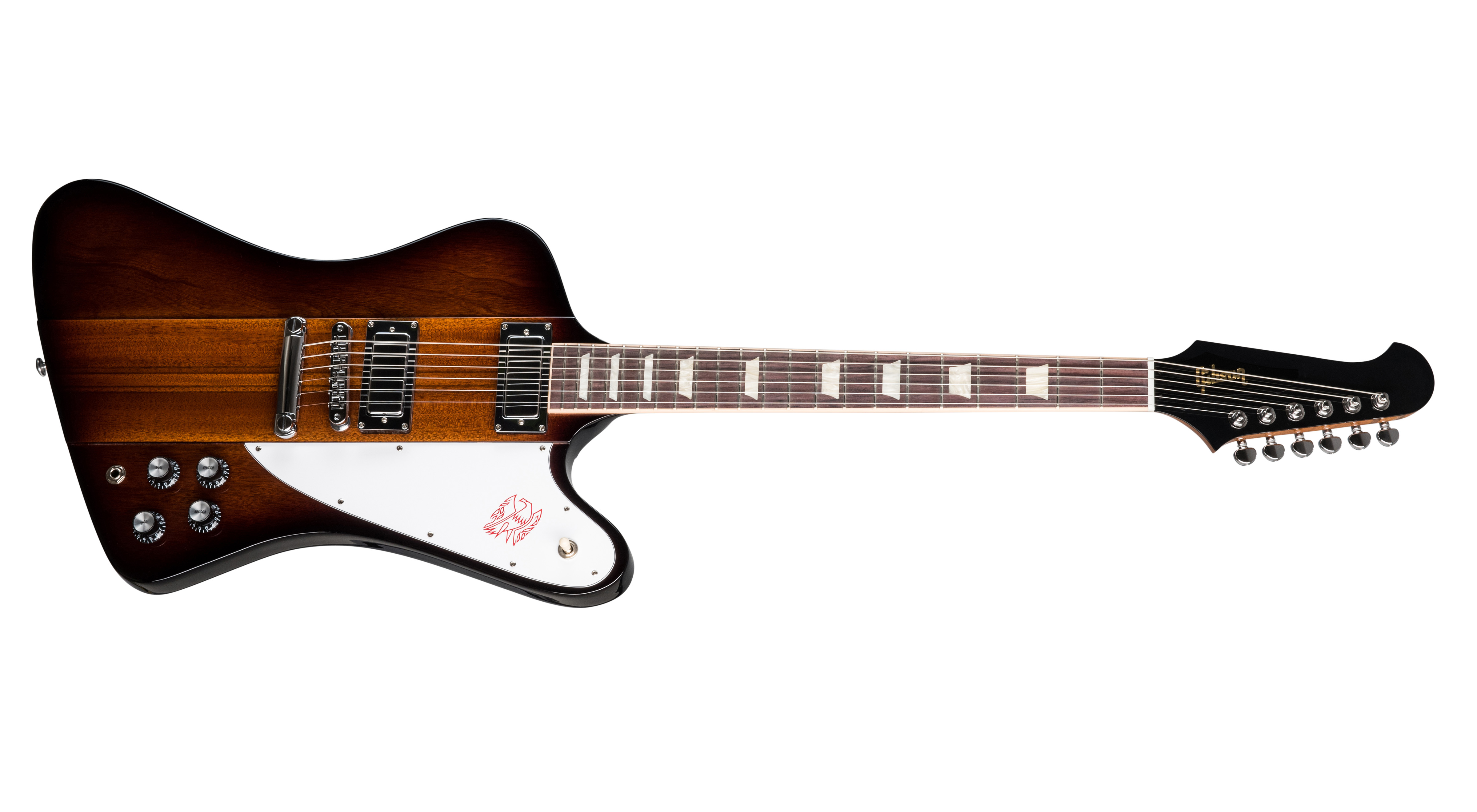 Finally they featured a reverse headstock and banjo tuners… I’m not defending that one. An argument could be made for the physics of your low E being the longest string on the guitar, but I can’t get behind the banjo tuners. I’m sure there’s a compelling reason but I’m again’ it I say! Like the Flying V, there are very few artists who use the Firebird as a main instrument, but they do tend to crop up in the arsenals of some very well known guitarist. I guess once you’ve completed your Les Paul and SG collection, you have to branch out to keep it interesting.

So I promised to stick to the highlights, but just to give you an idea of what has been omitted, this period of Gibson history also brought us, although not necessarily in this order: